St. Thomas, U.S. Virgin Islands. A dozen yachts raced around the neighboring island of St. John in a clockwise fashion under a mix of sun, squalls, and wind gusts to 20-plus knots in today’s Round the Rocks Race. In the end, the USA’s Victor Wild’s Botin 52, Fox, won the CSA Spinnaker 1 Class in the Round the Rocks Race, the UK-based Beneteau First 40.7, Escapado, finished first in CSA Spinnaker 2, and the USA’s Manny Valerian on Stinger led the IC24s. The race was a great one-day warm-up for the kickoff of the 48th St. Thomas International Regatta, Friday through Sunday.

“We are so thrilled to welcome all sailors to our 48th annual St. Thomas International Regatta”, says Commissioner Joseph Boschulte of the Department of Tourism. “The continuous success of this event is a testament to the strength of our islands as a marine destination. We were the only major Caribbean Regatta to take place last year thanks to the hard work and close partnership of the Department of Tourism, Department of Health, Regatta organizers, and Governor Bryan and we look forward to continuing this event for years to come”.

Round the Rocks Winners

This marks the second year in a row Fox has raced in STIR, and the local knowledge gained last year proved helpful in today’s race. The Botin 52 finished the circumnavigation of 19-square-mile St. John in an elapsed time of 2 hours, 10 minutes, and 56 minutes. 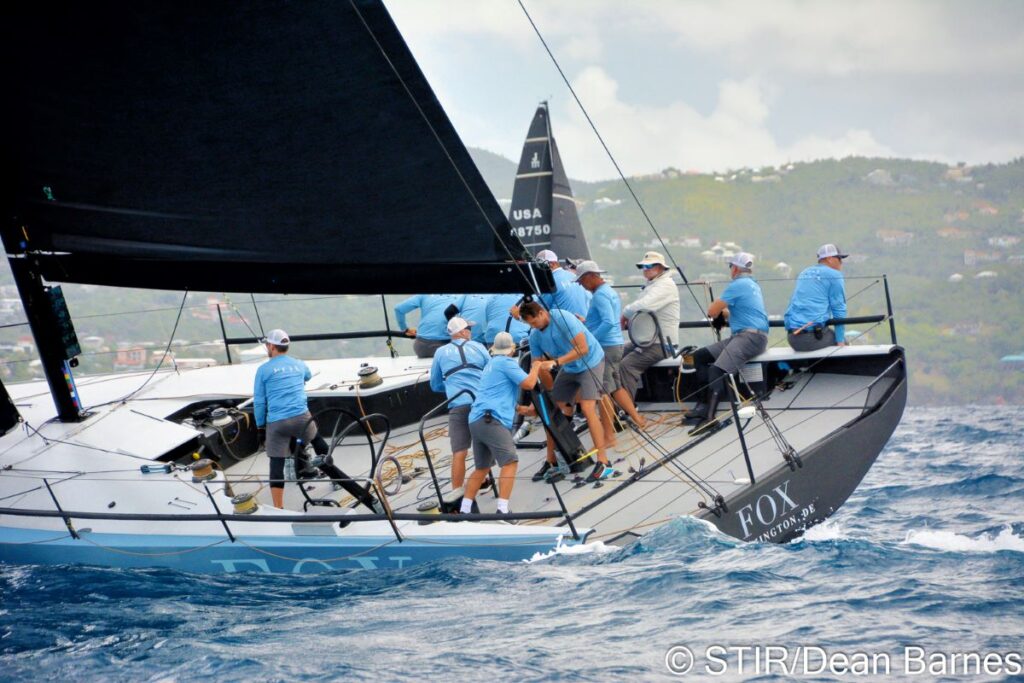 “We know where the rocks are from last year and are familiar with the (wind) shifts that can happen on the northside of St. John, so we were ready. We got a good start, stayed out of the current and into the breeze. We had a long beat up the inside off the north shore where the waters were pretty calm. Then once we rounded the eastern end of the island, we put the kite (spinnaker) up and had an epic run along the south side of the island where the breeze was 25 knots plus. Tomorrow, we’re looking forward to a combination of round the islands, rocks, and buoy courses. It’s much more exciting than the standard windward-leeward courses,” says Andy Horton, Fox’s tactician.

Escapado, one of the vessels in the London, UK-based Sail Racing Academy, was helmed to a first in class by Peter Caturegli from San Francisco, CA.

“This is the first time we’ve sailed this regatta. We have a fairly green crew, half from the US, half from the UK, half women, and half men. We were late to the start, but it was because we slowed to put a reef in the sail right before the start because of the gusty wind. But it paid off in the end. After today, we feel well practices and ready for a challenging and fun regatta,” says Caturegli.

Photo: Start of the Round the Rocks Race. Credit: Dean Barnes

Fox, Escapado, and Stinger are three of nearly 50 yachts registered for STIR 2022. The fleet spans from the Virgin Islands’ own 24-foot IC24s to vessels up to 65-foot. This fleet will race in five classes, including CSA (Caribbean Sailing Association) Spinnaker Racing, CSA Non-Spinnaker, and One-Design classes. Skippers and crews hail from the Caribbean, USA, and Europe.

One entry in the nearly 20-boat IC24 class is the BVI’s Mark Plaxton, sailing INTAC.

“I’ve been coming to St. Thomas for over 26 years to participate in the Rolex and more recently STIR and to enjoy the great hospitality of the USVI. The highlight is the local VI racers and competitors! In fact, many of the best sailors/racers in the world hail from the USVI such as Peter Holmberg, Ben Beer, Anthony Kotoun, and more recently arguably the best racer in the world Taylor Canfield,” says Plaxton. “Team INTAC has focused on youth racing for many years. This year a few of the young lads whom I used to coach, many years ago on the INTAC IC-24 and who are no longer young lads, will be again racing. One of them will be driving together with my 15-year-old daughter who will share some of the driving. As always, we hope to bring out a young racer from the St. Thomas Yacht Club for some good fun and to continue to light a spark in the future VI racers.”

Regatta organizers are pleased to announce that Bacardi, Michelob ULTRA, Stoli, and Milagro, distributed in the U.S. Virgin Islands by the West Indies Company, are the official beverages of the 2022 St. Thomas International Regatta. One of the quintessential facets of a Caribbean regatta is the after-racing camaraderie ashore to discuss the tacks and gybes of the day, and Bacardi rum, Michelob ULTRA, Stoli Vodka, and Milagro will be there and an equally iconic part of the fun.

To follow the action, check out STIR on Facebook (www.facebook.com/stirvi), Twitter @stirvi, and Instagram #STIRVI. Real-time scoring is available at: https://yachtscoring.com/emenu.cfm?eID=14738 under Race Results. For more information, visit www.stthomasinternationalregatta.com, Email: stycisv@gmail.com or Regatta Co-Director Pat Bailey at simpleislandboy51@gmail.com, or call (340) 775-6320.