The Sint Maarten Yacht Club hosted the Grant Thornton Multi Class Regatta this past weekend April 10 – 11 and witnessed excellent racing in somewhat challenging wind conditions. Light and shifty winds put the race committee and sailors to the test on Sunday, but none were deterred by a little hard work and 5 races were completed before 1pm, setting the total number of races over the entire weekend at 12. With teams participating from St. Barth’s (SBH) and St. Martin (Friar’s Bay), stiff competition was assured. Whereas some were battling it out for podium places, others were strong and kept racing consistently. With 5 different classes of one-design racing, it was an appealing event for all participants. 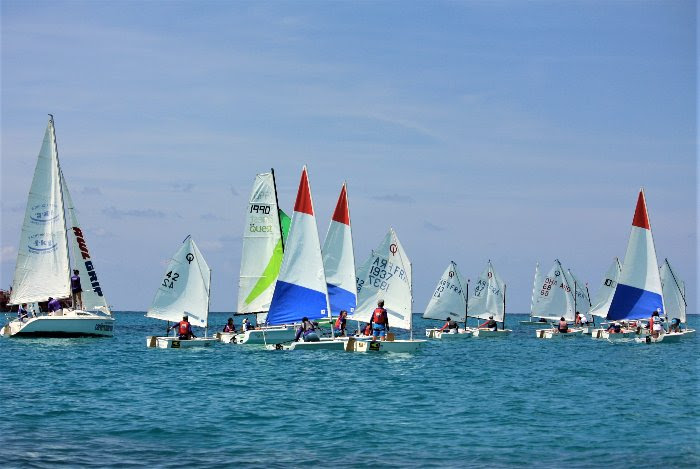 The Optimist fleet with 13 entries, was the largest one on the waters of Simpson Bay. There were those with years of experience racing hard for every meter in the Blue fleet and a Green fleet for the less experienced sailors. The winners in the Green fleet were Clément Le Normand from St. Martin in third place, followed by Paul Berlande Pages from St. Martin in second and first place was claimed by Veronica Destin from Sint Maarten showing her continuous development throughout the entire weekend.

In the Blue fleet the 8 competitors had their own individual battles within the class resulting in extremely close racing, leaving Arthur Bruel from St. Barts and Karman Paul Loup from St. Martin at a tie for 3rd place, with Karman Paul Loup earning this prize. The real battle was between Jules Fortunati and Lolie Osswald from St. Barts who both finished consistently in either first or second place. Lolie Osswald in the end took more wins and left Fortunati behind in second place, coming first with a 4-point difference. Her excellent racing also got her to be awarded with the trophy for Overall Winner of the Grant Thornton Multi Class Regatta. 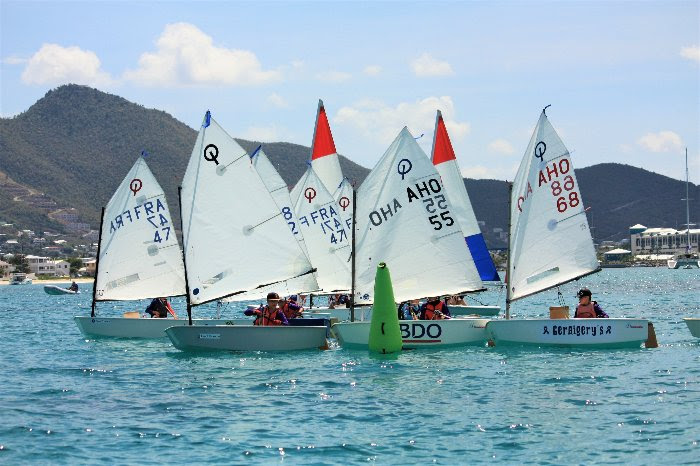 13 Optimists participated in the event this weekend

Paul van Vliet represented valued sponsor Grant Thornton at Sunday’s prize giving. He said: “It is amazing to see the turnout for this event, with 33 boats on the water we can truly be proud of the success of the event. With attendance from sailing schools from St. Barts and St. Martin you can most definitely tell there is a keen interest in sailing in the region. Our main reason for sponsoring the Multi Class Regatta and the Dinghy and Keelboat Series is to support the efforts made by the Sint Maarten Yacht Club to continue to promote sailing.”

In the Laser Pico class Boo Faustin (SXM), Melina de Vries (SXM) and Emma Turbe (SBH) competed for the overall win. Faustin won 3rd place, an excellent result considering he only started racing last summer and having sailed in only one other regatta. De Vries took 2 bullets on Saturday, putting up a good fight for Turbe, who showed consistent racing on Sunday claiming 4 bullets, making her the first-place winner in her class.

3 Sint Maarten teams competed in the Sunfast 20 class. Robbie Ferron and his team took third place with only 1 point difference with Nils Jannichsen and his crew. Rien Korteknie together with his all-female crew, with Jessica often seen at the helm, convincingly claimed first place. 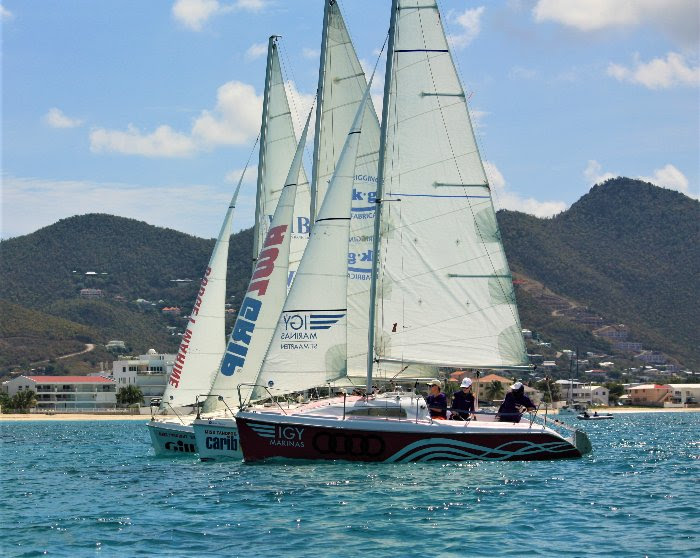 3 teams from Sint Maarten sailed in the Sunfast 20 class

“It has been an incredible weekend; everyone was so keen to race and of course the weather was beautiful. The winds were a little light on Sunday, but the Race Committee made it work brilliantly. On Saturday, the courses were kept relatively simple, allowing for enough playing ground for all classes. On Sunday Race Officer Paul Miller decided on reaching starts and a more challenging course. It made for lots of smiling faces on the water and great competition. I am actually very proud to see that the majority of classes were dominated by females, resulting in 4 female class winners.” Said head sailing instructor Saskia Revelman.

The participation in the laser fleet has been on the rise this season which was clearly visible in the number of laser sailors in this event, with 10 entries. With upcoming talent in the 4.7’s Emma Lennox, Jordan Pieterse and Skylar Peterson (all SXM racers) competition is getting excellent. The top 3 consisted of veteran Laser sailor Frits Bus (SXM) in third place. In second place came Justin Pieterse (SXM) who sailed excellent and very consistent all weekend, providing Bus and Benoit Meesemaecker (SBH) with much-anticipated competition. However, with 10 bullets nobody was going to beat Meesemaecker, who even in shifty, light winds managed to keep ahead of the fleet. 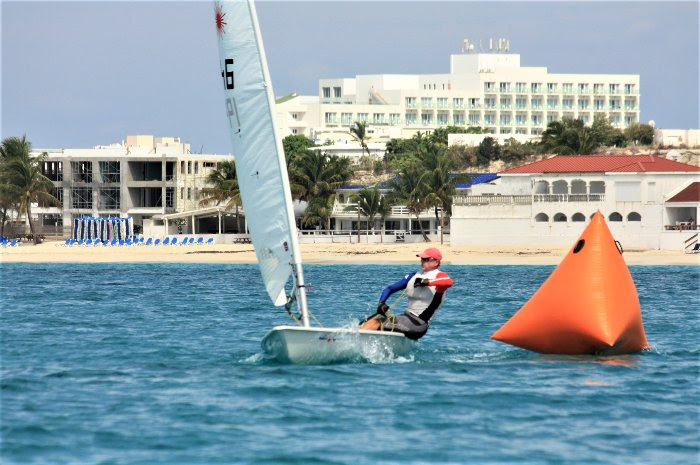 The RS Quest fleet saw 4 entries, including the new Sint Maarten team Louka Williams and Terrance Agard. Mathijs Detering sailed with Delhan and battled throughout the weekend against Arthur Banting and Keeva. It resulted in a tie, with Detering taking third place and Banting second place. Winners of the Quest class were Tibo Turbe and Anthonin Sciou from St. Barts.

The Grant Thornton Multi Class Regatta would not have been possible without the support of Grant Thornton, Dominos Pizza and Zee Best Bakery.

For all results check regattaguru.com. For more information, photos and much more visit .com/ multiclasmycss-regatta.