Battles in the RORC Transatlantic Race

21 yachts are still racing in the RORC Transatlantic Race. At 0800 UTC on the 13th day, Jochen Bovenkamps’s Marten 72 Aragon was 273 miles from the finish and estimated to arrive at Camper & Nicholsons Port Louis Marina around midnight local time on Thursday 7th December. The ETA for Teasing Machine, Sorceress and Outsider is Friday 8th December. 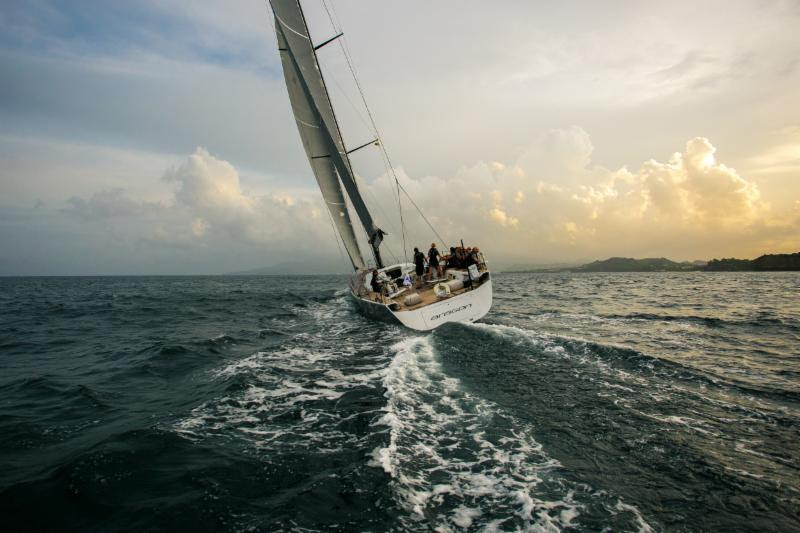 In IRC One, three German yachts, just over 1,000 miles from the finish in Grenada, are vying for the class win: Björn Woge’s Andrews 56 Broader View Hamburg, Friedrich Boehnert’s Xp50 Lunatix, and von Eicken and Brockhausen’s Swan 56 Latona. All three yachts have fathers and sons on board; Latona has three generations of the von Eicken Family. Father and son, Bene and Björn Woge on Broader View Hamburg, contacted the media team via satellite:

“A few days ago we saw whales really close by (a little scary to be honest) and every now and then some dolphins kept us company. Night sailing is really impressive as we are chased by a trail of glowing plankton which looks beautiful. During the night we have a light that shines into our sails for us to see, but it also attracts flying fish. We have to clear our boat regularly from dead fish on deck. It’s hard to describe just how enormous the Atlantic really is. The surrounding is pretty much the same now as it was on the second day – water! But never the less, we are we looking forward to sailing well and maybe even leading the father-son challenge. We are looking good right now.” 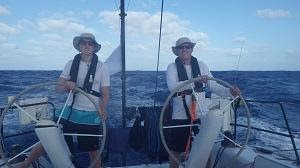 An area of high pressure has effected all boats racing in IRC Two. Richard Palmer’s JPK 10.10 Jangada racing Two-Handed with Rupert Holmes, has built a formidable class lead after time correction. However, Jangada has a gentlemen’s wager with Gemervescence, skippered by RORC Commodore Steven Anderson and co-skipper Jane Anderson. The wager for a bottle of rum will be won by the first to finish the race. Currently Jangada leads on the water, but Gemervescence looks to have taken a better line through the high pressure and is closing the gap. In the Multihull Class, Gerald Bibot’s Belgian Catamaran Zed 6 gybed northwest yesterday morning and is now less than 1,000 miles from Grenada.

In the Class40 Division, Mathias Mueller von Blumencron’s Red has regained the lead from Berthold and Tobias Brinkmann’s MarieJo. The two German yachts have been enjoying an intense battle with the lead changing hands on at least three occasions. Red is now just 5 miles ahead of MarieJo. Both yachts are expected to continue a high-speed match race right to the finish. 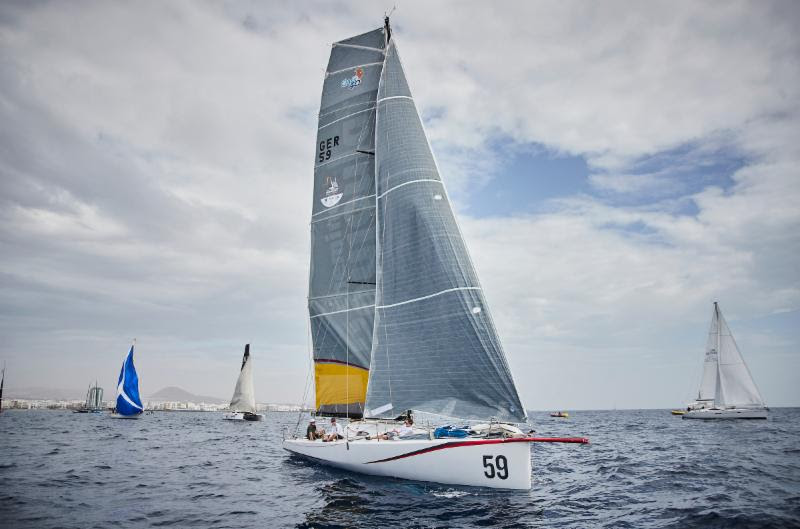 Here is a summary of Red’s blog sent via satellite, depicting life on board:

“A zone of squalls approached from the east and we tried to avoid the worst clouds with gybes. Heavy wind shifts too. We were managing to go further south, on port with amazing favourite compass readings for us. Very tactical sailing. These clouds can be very, very ugly. The Maxi CQS experienced 40 knots of breeze; we know that mode too. On the other side, the clouds can bring fortunate breezes if you approach them from the correct angle. Now we see how all this influences our position in the competition. Unfortunately, we have little room to gybe further south again as we are almost on the layline to the finish. Grenada is 940 miles ahead – one and a half Fastnet races away – with the difference that it’s a downhill slide only. The last day was easy sailing, 16 to 20 knots of breeze, a relaxing ride with our big spi. Today should evolve similarly. From tomorrow afternoon the sprint to the finish begins. Wind will increase up to 22 knots, the deck will be wet again, the noise under deck is like on a motorboat at full speed. At night it will be pitch black as the moon rises now at midnight and in two days, not even that.”

YB Race Tracker: http://rorctransatlantic.rorc.org/tracking/2017-fleet-tracking.html
Individual yachts, classes or the whole fleet can be tracked throughout the race 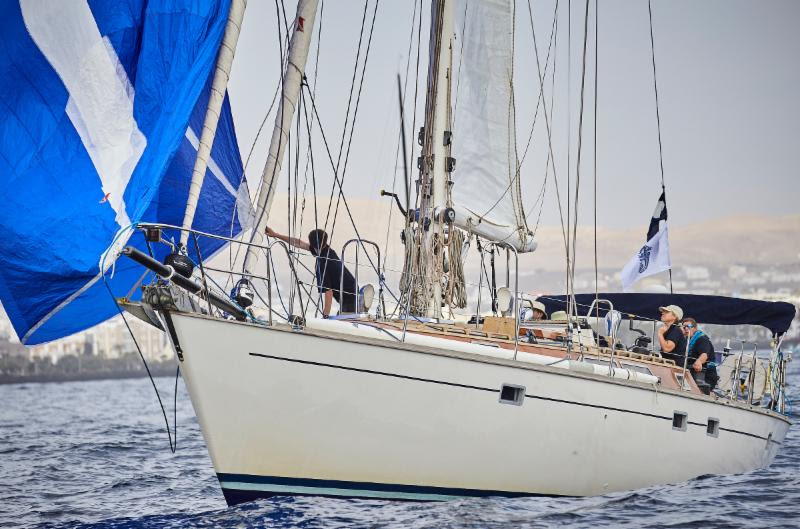 Closing the gap. In IRC Two, a bottle of rum is at stake between Steven Anderson, RORC Commodore on his cutter Gemervescence and Richard Palmer’s Two Handed JPK 10.10 Jangada © RORC/James Mitchell 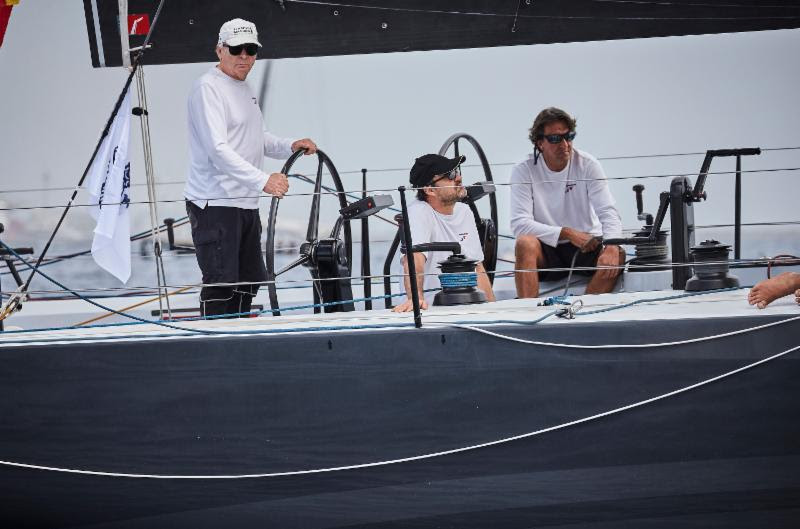 A Friday finish for 2016 Commodores’ Cup winner, Eric de Turckheim at the helm of his 54ft Teasing Machine at the start of the 4th RORC Transatlantic Race © RORC/James Mitchell 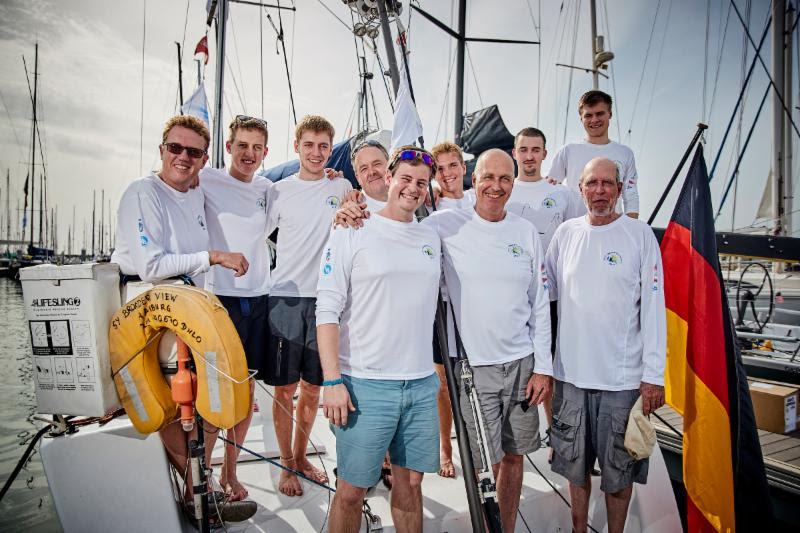 Hoping to win the father-son challenge going on between several German yachts in the fleet with family members on board – Broader View Hamburg, owned by Hamburgischer Verein Seefahrt e.V Germany and skippered by Björn Woge, racing with his son Benedikt on board the Andrews 56 © RORC/James Mitchell