Eight boats participated in the Carib Marine Regatta over two days in excellent conditions and close racing. Frits Bus was the clear and deserved winner in the racing class with five bullets (first places). On the first day there were two short races and a long one ending in Great Bay. On the second day there was one long race and two short ones ending in Simpson Bay.

In the racing class the only boat giving Frits Bus’s Team Island Water World real stiff competition was Jan van den Eynden’s Wanna Be who in one race got to only a 7 second corrected time difference. Wanna Be took second place. In third place was a visitor from St. Barths, Speedy Nemo helmed by Patrick Bernier who started off well on Saturday with several second-place finishes, but on Sunday he fell towards the back of the pack, still claiming an overall third place. 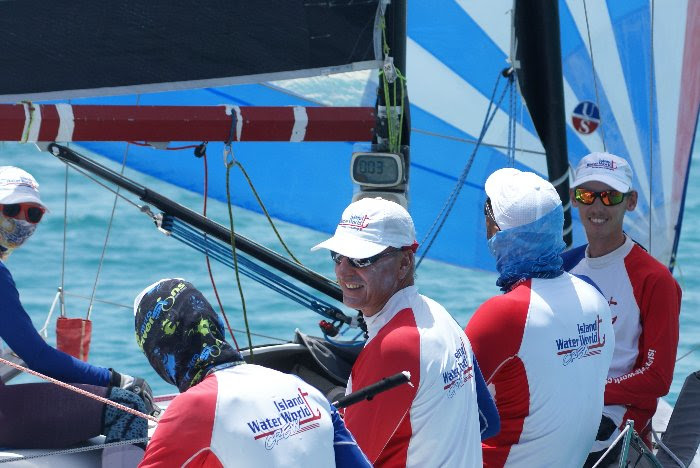 The cruising class of two boats was won by Bunglebird, the Nonsuch 33 that held back an ever-improving Albireo, a Swan 411 owned by Steve Burzon and helmed by Petro Jonker. This boat had taken a 30-year break from racing, and is now slowly eased back into racing with an excellent and fun crew.

The racing was made possible by a race management team led by Don Terwilliger who not only started the races but also laid the bouys, and due to the unusual southerly wind had to make some course changes by radio. The awards ceremony at the Sint Maarten Yacht Club on Sunday evening had the typical ambiance that follows from a weekend of great Caribbean sailing.

Next week the sailing focus switches to the Dinghy classes as the first day of the Hope Ross Series commences on Saturday afternoon. The final Keelboat race takes place on June 13.

For results, photos and more information about the race check www.smyc.com/carib-marine-regatta