Stu McNay commented on their performance at 470 Worlds: “We’re always trying to improve our score each day we go on the water, and today we did that. We moved up one place from sixth to fifth, so ‘mission accomplished,’” said McNay. “We are optimistic about where things are. We haven’t raced against the top-level European teams in well over a year, so this was a very important check-in for us to see where we stand relative to this gold-standard group. They have been training against each other all year long, so we think we’re in a good place to be able to refine where we are right now and move up a couple of places on the leaderboard going into the Olympics.”

“It was really awesome to sail the medal race today,” said Barnes. “Finishing, we were filled with joy knowing that we’ll be nominated by the US Sailing team to go to the Olympics. We’re incredibly happy that we met our two goals for the regatta: qualifying as the top US team, and being top eight at the Worlds. We’re super happy and ready for more!” 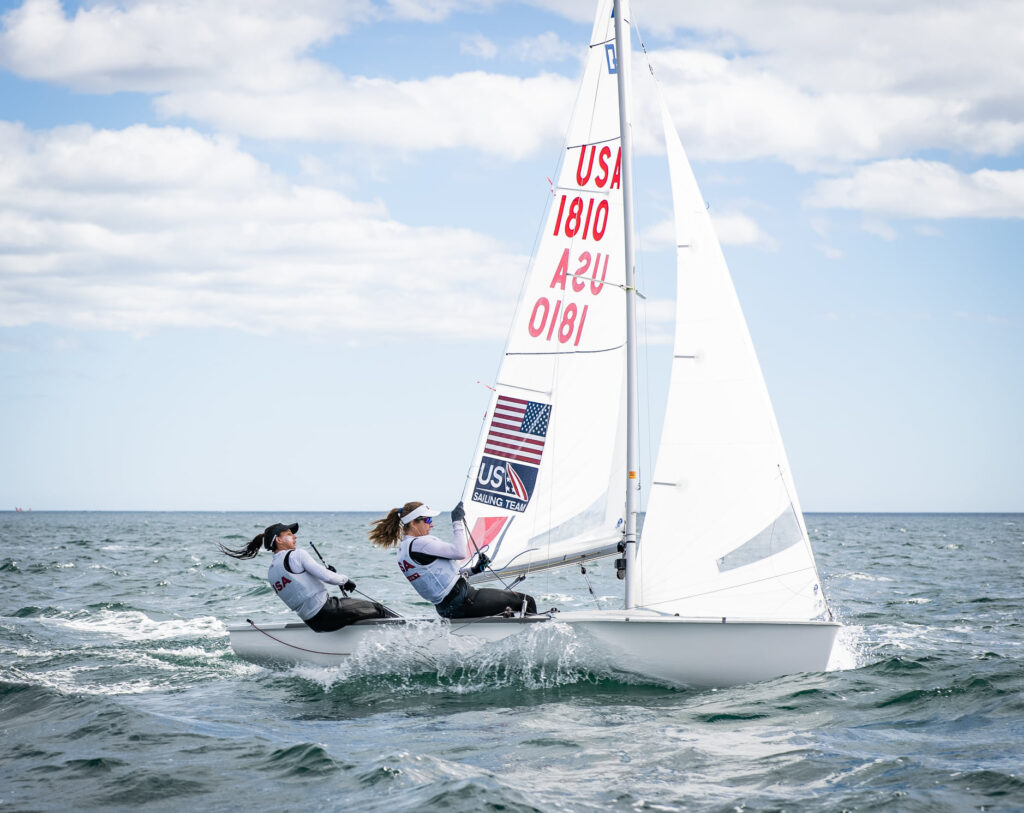 In qualifying for her first Olympic Games, Barnes is also the first USCG active-duty officer to qualify for the Olympics in any sport. She feels the leadership skills she is learning from her Olympic campaign will translate well to her duties as an officer, enhancing the skill set of the service. Due to her Covid work for the Coast Guard last spring, she earned enough qualifications for a promotion to Lieutenant this May, all while pursuing an active Olympic campaign.

All of the 470 teams’ efforts this year have been dedicated and focused in the extra year of preparation. The race for the Olympic berth for the women has indeed been a catalyst for rapid improvement and exceptional progress in their racing skills.

“Overall, we would not have gotten to this point, into the top 10 and a Medal Race in a World Championship, without having incredible competitors,” said Barnes. “The Cowles and Brugmans have challenged us, and it hasn’t been easy because they are excellent sailors. This week, as a team, we stuck with what we know, changed it up when necessary, adapted quickly, and when it was time, enjoyed the moment.”

“We’re in admiration – all the women’s teams raced their hearts out in the trials here,” said McNay. “It came down to the wire and we have a lot of respect for each of their team efforts. It’s fantastic to see how much the 470 women have improved as a group.”

Luther Carpenter, US Sailing Team Head Coach, added these comments: “It is so exciting to watch our broad base of experience and talent perform well at this World Championships. Our culture in the US has been to focus deeply on the details and goals in our own backyard, and sail with conviction and confidence. This check-in at the Worlds is a testimony to the process, effort, and passion that all of these sailors have put forth.”

“In addition to our seasoned campaigners, it’s also great to see our 2024 squad off and running in their first World Championships. Yevginey Burmatnov has done an exceptional job fast-tracking our mixed team effort and guided these young super-talents straight into a regatta filled with top-level Tokyo talent. The lessons they learned here will be the motivation and blueprint for them to build on in the next three years.”

Both McNay/Hughes and Barnes/Dallman-Weiss will return to Vilamoura, Portugal for the 470 European Championship April 30 – May 7. After a recharge and break at home, these teams and coaches will be back at work, building on the success and momentum they experienced at Worlds.