St. Thomas, US Virgin Islands. A new perpetual trophy will be introduced at the 2022 International Optimist Regatta (IOR), set for June 13-19, at the St. Thomas Yacht Club (STYC). The Founders Trophy serves as an inspiration to honor past and promote present and future participation in the event by female sailors. The new trophy is the brainchild of two of the event’s five founders, Henry and Fredelle Menin, who started the IOR in 1993 with fellow co-founders Verian Tuttle, Karen Paige, and the late Bruce Marshall. The IOR is today widely recognized as jump-starting Optimist sailing in the Caribbean, the result of which is that thousands of the region’s youth have learned to sail. IOR past participants, both female and male, have moved on to make waves in the Olympics, America’s Cup, Match Racing, and one-design national and international championships. The IOR’s new Founders Trophy is in step with efforts by World Sailing to promote gender equality in all aspects of the sport. 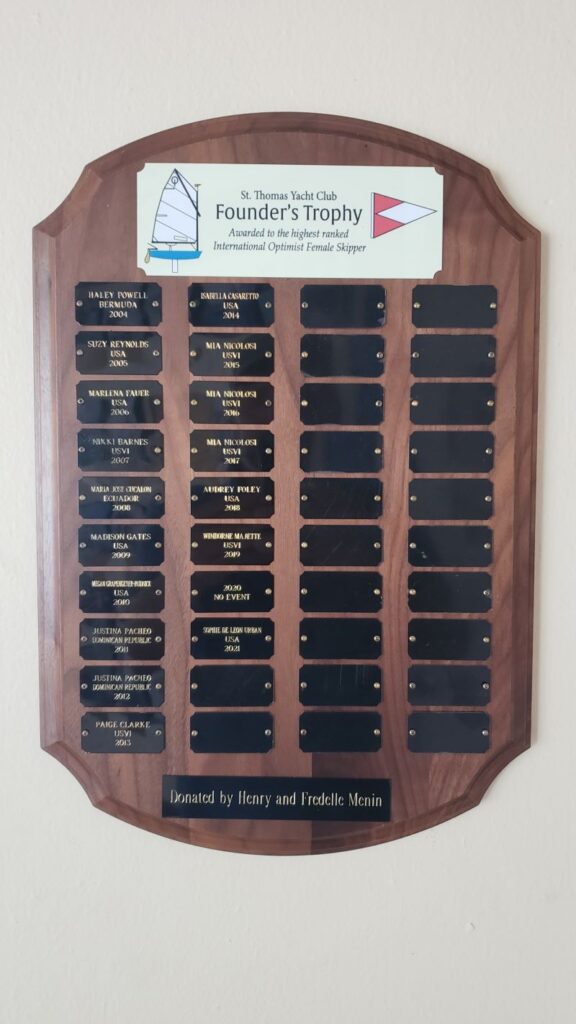 “Promoting women in sailing has always been a high priority for my wife and me,” says Menin, a long-time STYC member, past Commodore, avid racer, and race committee member. “When I was campaigning my various racing boats here in the Caribbean, we always made sure that we had women on our crew. They were instrumental and essential to the success we had. When I became active in match racing, and when I chaired the Match Racing Committee for World Sailing, I helped develop the Women’s Match Racing Tour, and subsequently, we got Women’s Match Racing into the Olympics in 2012. So, women in sailing, and the encouragement of their participation, have always been near and dear to our hearts.”

In St. Thomas, adds Menin, at STYC, and particularly at the IOR, many young women have gotten their start in racing. Many of these women moved on to high school and college racing, on to major national and international regattas, and of course, with our own Mayumi Roller and Nikki Barnes, on to the Olympics.

“Though the IOR has honored and recognized the best female sailor for many years, there has never been a permanent trophy to memorialize their achievement.

Fredelle and I seek to change that by presenting this trophy to the STYC, named The Founders Trophy, for the five of us who started this regatta,” says Menin.

The new Founders Trophy will be presented starting this year, and each year forward, to the best female sailor at the IOR. In addition, the winner’s name will be engraved in a perpetual version of the trophy, thus adding that young women’s name to the list of outstanding women whose names are already engraved.

The 2022 IOR kicks off with the TOTE Clinic, June 13-15; followed by the TOTE Team Race on June 16; and the IOR from 17-19, 2022. Currently, over 100 sailors are registered with females representing over one-quarter of the fleet. These young women include Florida’s Elizabeth Xydas, who is one of the team members representing the USA at the European Optimist Champions, July 30-August 6, in Denmark. Three of the five USVI team members representing the territory at the Optimist World Championships, June 27-July 7, in Bodrum Turkey, are female: Audrey Zimmerman, Emma Walters, and Mariana Brunt.

For more information, call (408) 314-7119, or Email: internationaloptiregatta@gmail.com Or, for the Notice of Regatta (NOR), Registration Form, and other information, visit the St. Thomas Yacht Club website at stthomasyachtclub.org/sailing/regattas/international-optimist-regatta or Regatta Network: www.regattanetwork.com/event/23549.