10th January, Update: Day Three 1200 UTC: At 1200 UTC on the third day of the RORC Transatlantic Race all of the teams have now left the Canary Islands and should not see land again until they arrive in the Caribbean. After two nights at sea, the rhythm of life in the RORC Transatlantic Race will have been established. Due to the huge variety of boat designs, strategies and tactics are not the same on every boat. However, the common denominator for all of them is speed to Grenada. As the overall race winner is decided by IRC time correction, with a fixed correction at the start of the race, the teams know exactly how they are performing with every YB Tracker update. Follow the race HERE. 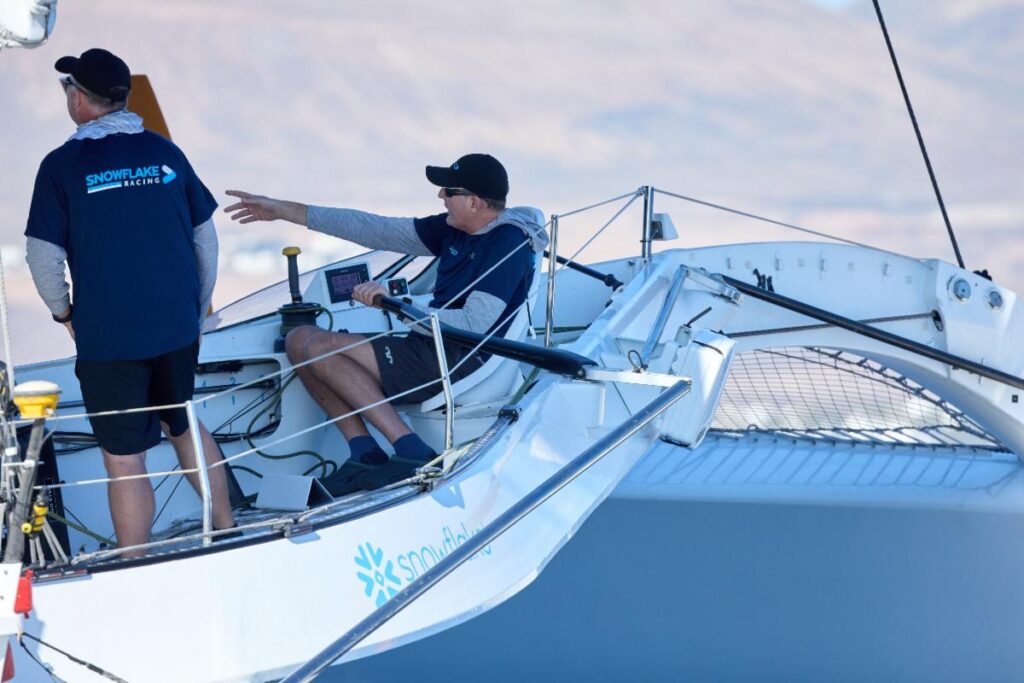 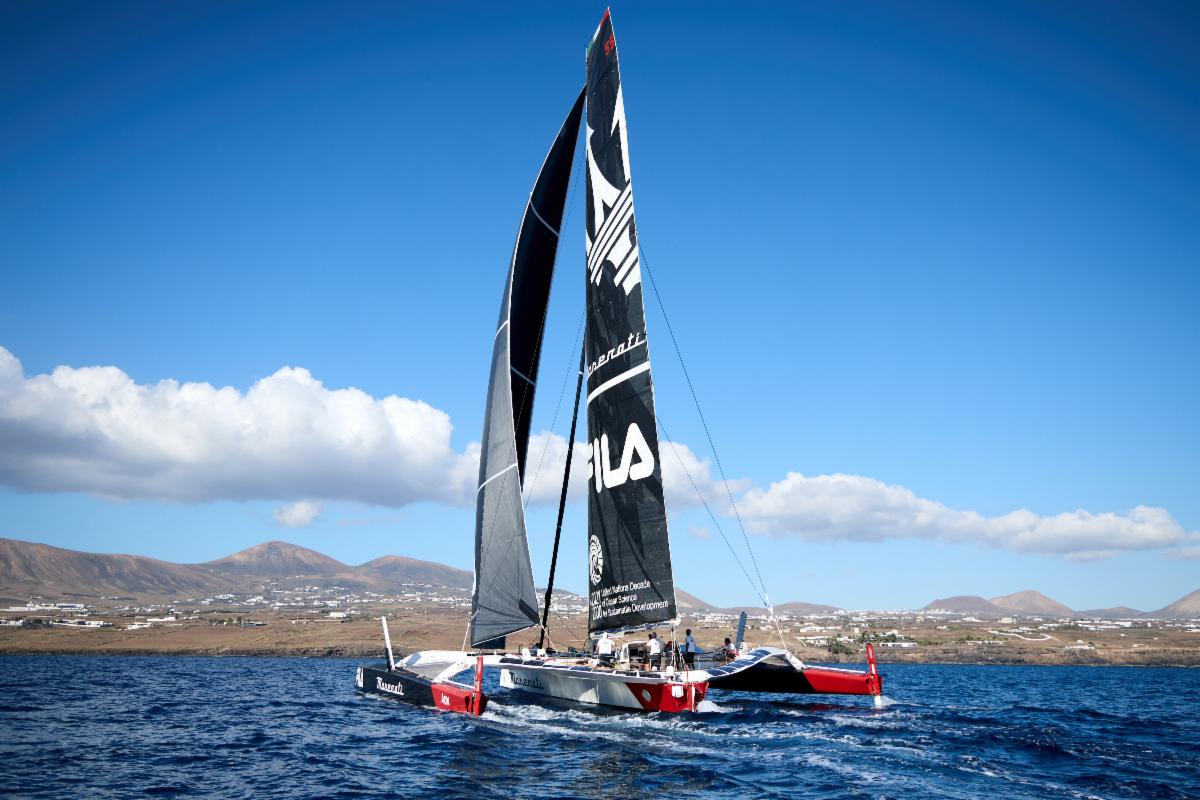 With boat speed in excess of 25 knots, it is a wild ride on board the trio of 70ft trimarans, which are expected to reach the halfway point in the race tomorrow on record pace. Giovanni Soldini’s Maserati Multi70 (ITA) is 1,885nm from the finish, leading the multihull class. Just 4nm astern is Frank Slootman’s MOD70 Snowflake (USA), skippered by Gavin Brady. MOD70 Zoulou (FRA) with Erik Maris at the helm, is 55nm behind Maserati but has taken a tactical dive south.

RORC member and Rolex Fastnet Race winning navigator for JPK 1180 Sunrise are Tom Cheney who is now part of the Snowflake race team. For the RORC Transatlantic Race Brian Thompson is the on-board navigator, but Tom has been assessing the weather routing prior to the start:

“Snowflake is ahead of the weather routing calculated before the start,” commented Tom Cheney. “Right now, it is breezy and that suits Maserati, and Zoulou has gone further south; I suspect looking for more wind. We hope that further down the track the wind will soften and the sea state should ease off a bit. If that happens then Snowflake has a shot at a result, and maybe the record.” 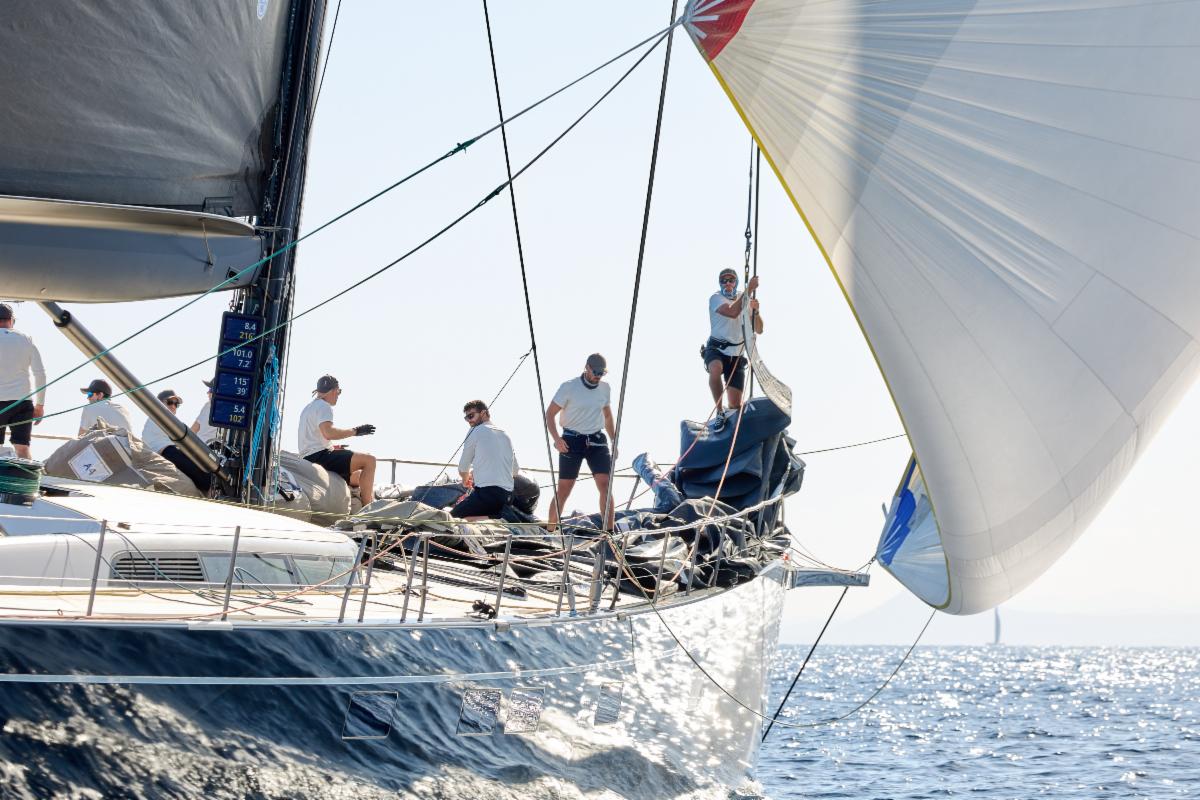 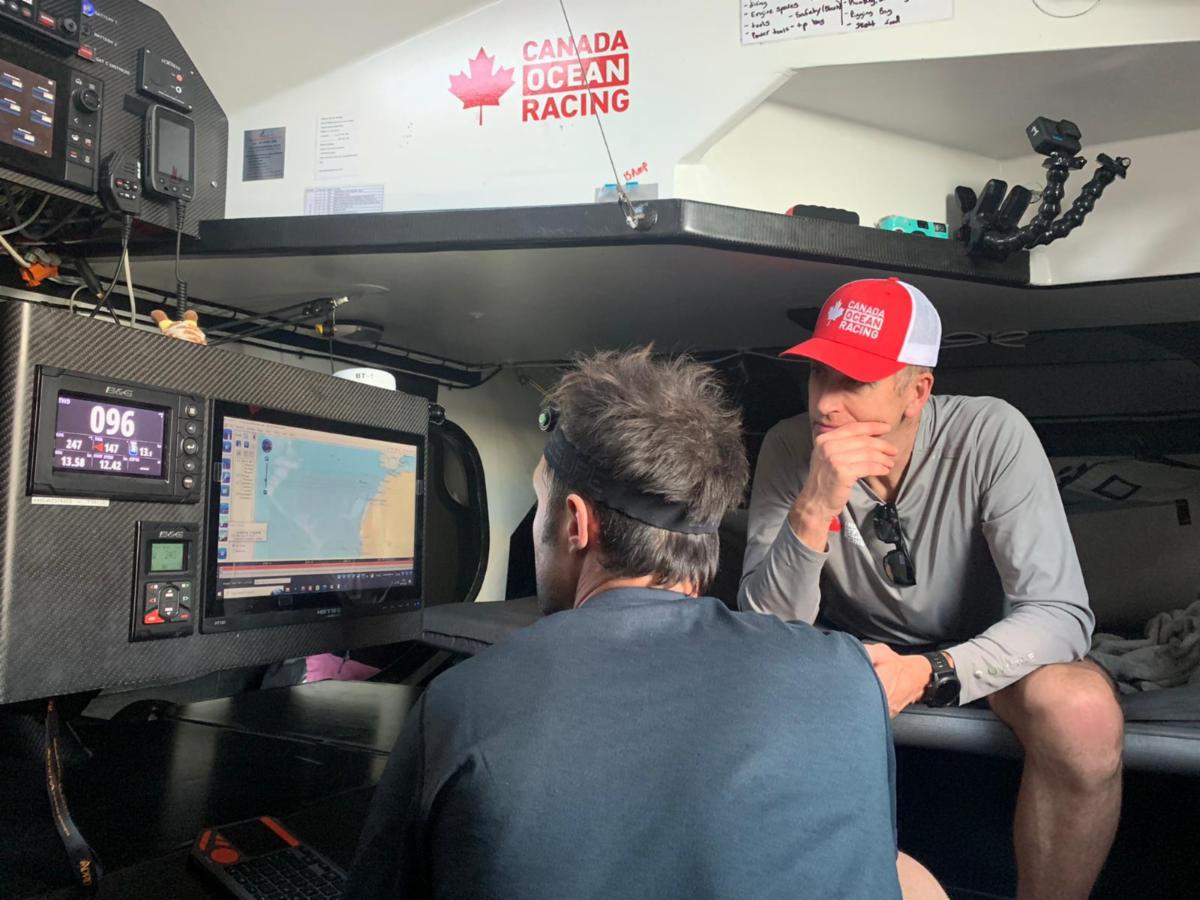 Volvo 70 I Love Poland (POL), skippered by Grzegorz Baranowski leads for the class and Monohull Line Honours, and after IRC time correction. Swan 115 Jasi (SWE), skippered by Toby Clarke is 19nm behind but has taken a move further north which may exaggerate this deficit. Scott Shawyer & Alan Roberts is in third place, racing Two-Handed on IMOCA 60

“24 knots of breeze and 20 knots of boat speed,” commented Scott Shawyer. “We had a couple of broaches last night when the autopilot didn’t adjust and we are not quick enough to ease the sheets. So, we are keeping a very watchful eye; it is not a restful time for sure. It is nice to watch the sun come up on this, our third day, as it’s bright and things seem a lot less scary. Once Alan is awake, we’re going to make some changes to the autopilot to make it a little bit better behaved!” 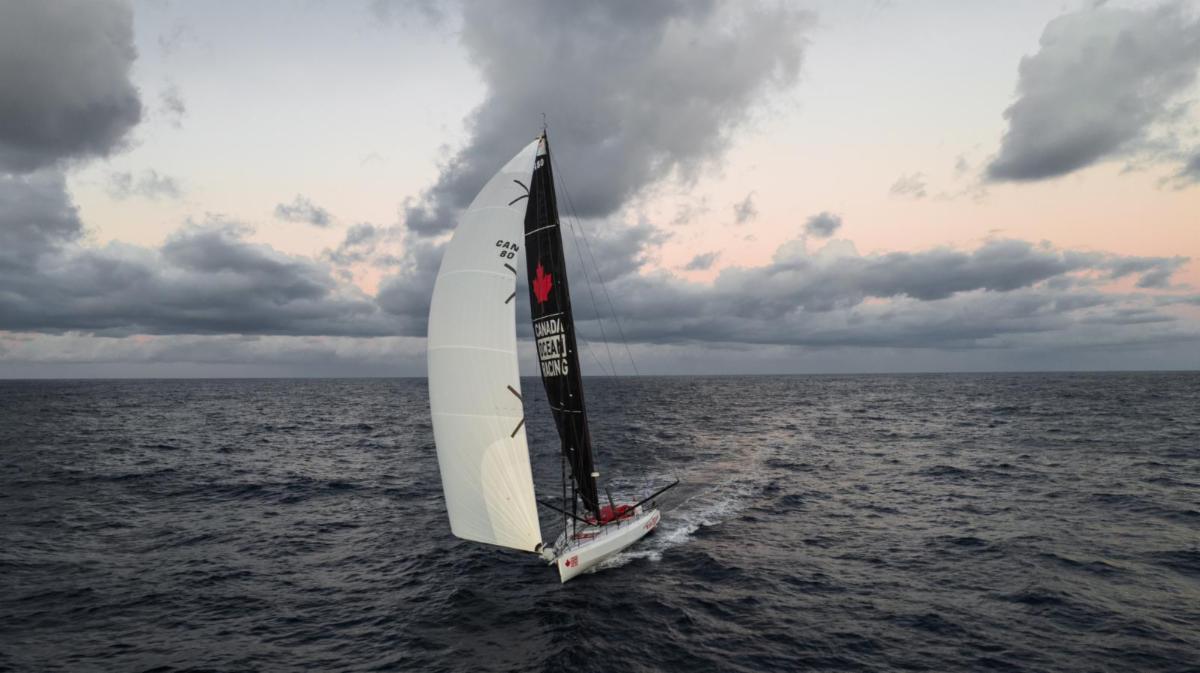 Botin 56 Black Pearl (GER), sailed by Stefan Jentzsch leads the class on the water with 2,377nm to go. Henri de Bokay’s Elliott 52 Rafale (GER) and Eric de Turckheim’s NMYD Teasing Machine (FRA) are 23nm behind. However, after IRC time correction, Teasing Machine is not only leading IRC Zero but also the race overall. Marie Tabarly 73ft ketch Penduick VI (FRA) and Culen & Jakubcik’s Akilaria 40 Sabre II left the Canary Islands behind at about midnight on day two. Both are now in the open waters of the Atlantic Ocean, reaching over 10 knots of boat speed. 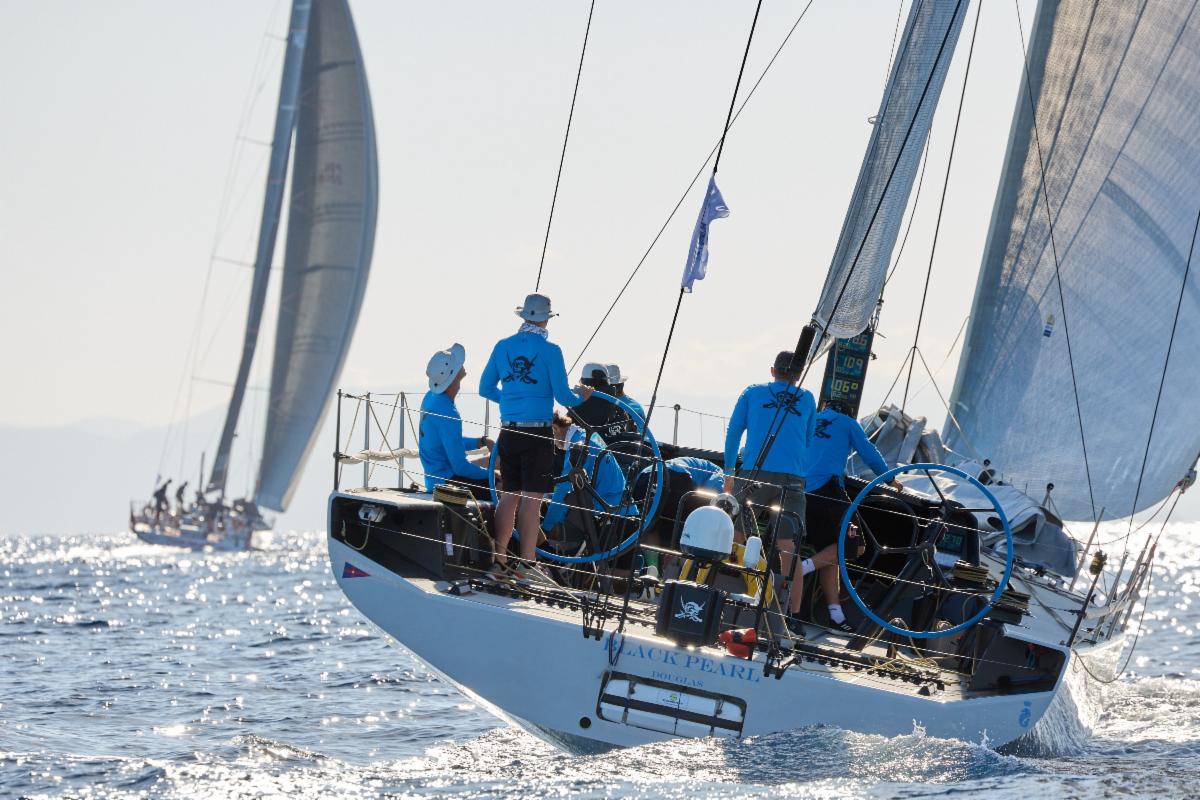 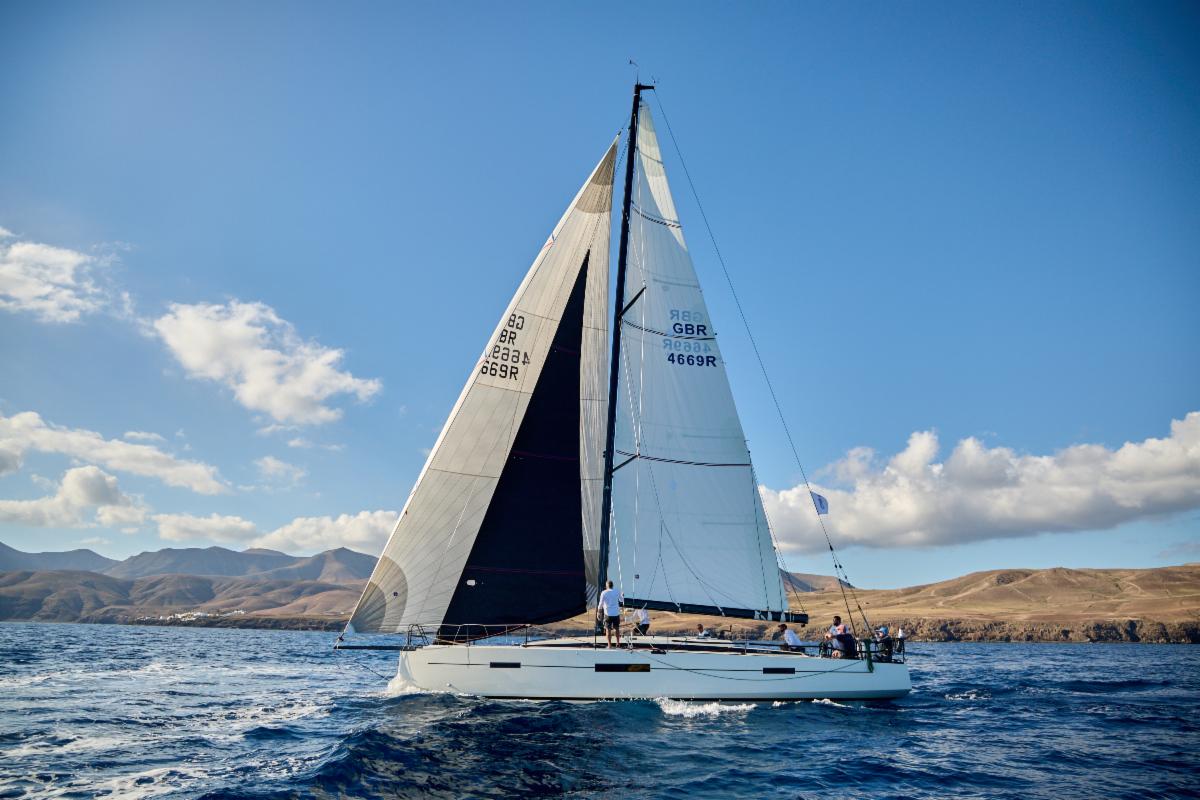 Kate Cope & Claire Dresser racing Sun Fast 3200 Purple Mist (GBR) have left the Canary Islands behind and in doing so made a big gybe northwest. The all-women Two-Handed team are the closest boat to the rhumb line of the entire fleet. Kate Cope shared a fact about life on board Purple Mist via her blog:

“Lots of people ask how we sleep,” commented Kate. “We do manoeuvres with both of us, then one of us pops off to bed leaving the other either helming or trimming a feisty spinnaker single-handed. In light winds, it seems best the autopilot steers and we trim, but mostly we lock off the spinnaker sheet and just steer to it. If it collapses you need to steer into it to fill it again.” 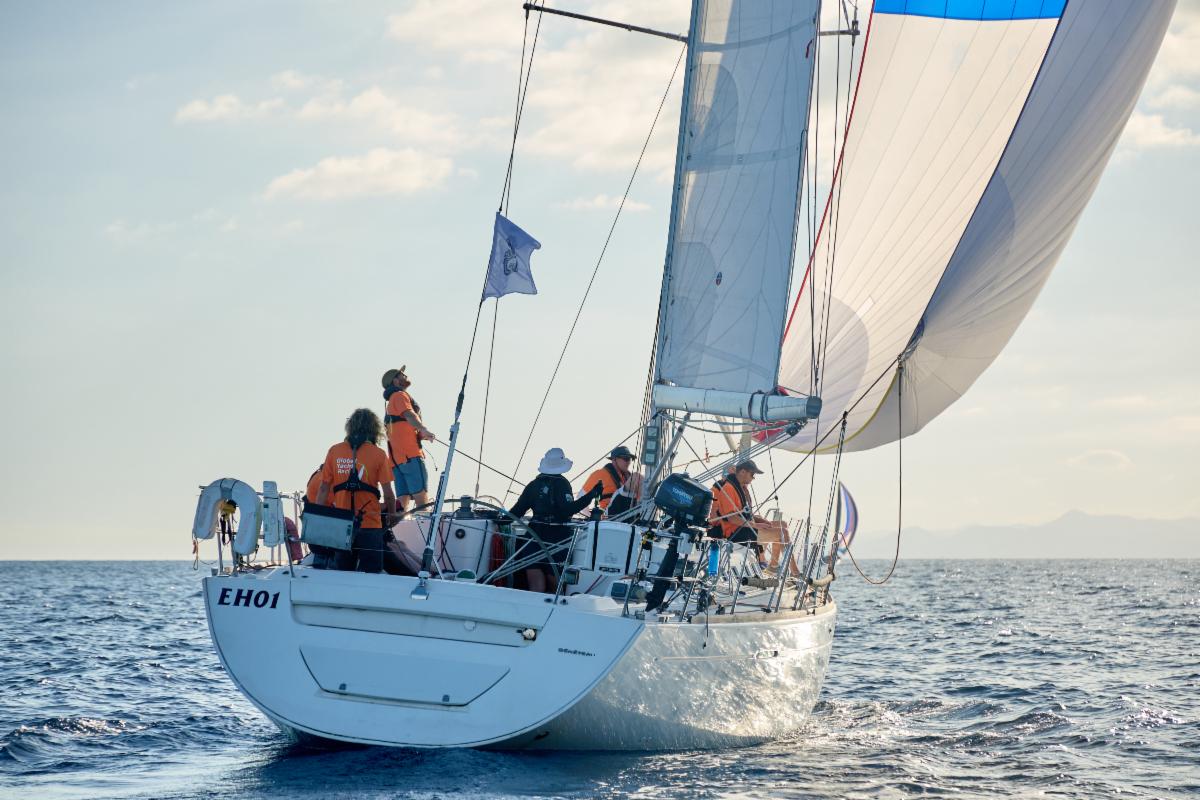