After four sensational days of racing, parties and entertainment—and some of the closest competition ever seen in the long history of this storied Caribbean event—the 40th Anniversary Edition of the St. Maarten Heineken Regatta concluded today in the same fine fashion with which it started, with the waters south of the isle dotted with tall, white mainsails and billowing, colorful spinnakers of every size and description. With a huge spectator fleet soaking in the visual feast, and a fleet of racing sailboats encompassing everything from Melges 24s to Volvo 70s to cruising catamarans to veteran America’s Cup 12-Meters, it was literally a waterborne Festival of Sail and a fitting way to wrap up the milestone event.

At the awards ceremony this evening at the regatta village on the grounds of the Port de Plaisance Resort, Marina and Casino, the top honors for Most Worthy Performance for monohulls and multihulls, respectively, went to James Barker and Jeno Amanav, the co-owners of the X-402, MYXY, and St. Maarten’s own Ian Martin, the skipper of the Leopard 45, Spellbound. 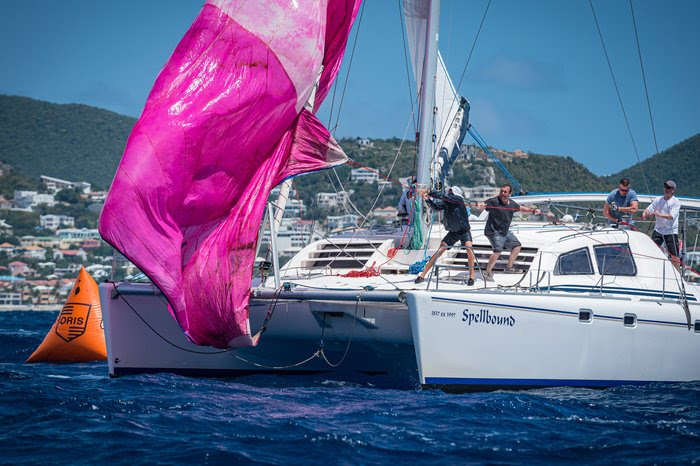 In presenting the prize to the crew of MYXY, race founder Robbie Ferron said the overall Most Worthy Performance award is presented to the team that wins the most competitive class most convincingly. And that’s just what MYXY did in the 13-boat CSA 5 class. After accepting the Oris watch given to the winner, Barker said, “We’re so happy to win this, we actually bought this boat off Facebook in 2017. We both work on super yachts and we’ve worked very hard to get here. We stripped the bottom with angle grinders and actually borrowed the sails to do this regatta. This has been such an amazing event. The organization’s been great. I don’t know what else to say.” 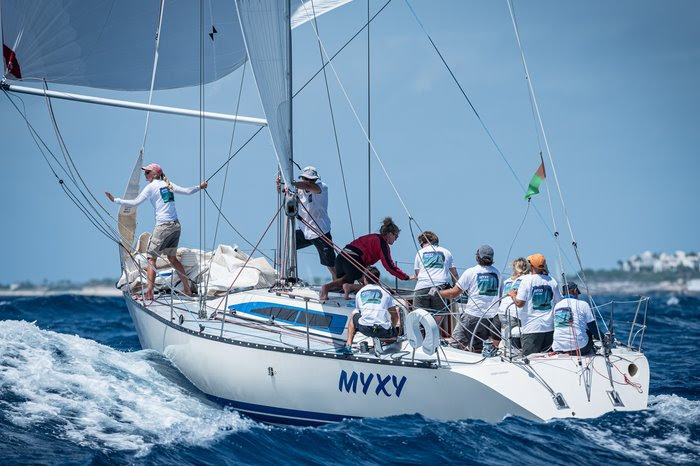 Martin and his crew were the decisive champs of the 13-boat Multihull 2 class, which they captured convincingly. The Most Worthy multihull prize is named the Randy B. West Trophy, in honor of the longtime, revered Caribbean sailor who was a driving force in catamaran sailing in the islands for many years. Martin said, “This is very special, to receive this in honor of our dearly departed friend. Randy was my mate, he’s a legend. I had the same crew on this regatta that sailed with Randy and me in the Marion-Bermuda Race, the Newport Bermuda Race and the Caribbean 600. We even had Randy’s book onboard to remember.” Martin presented the trophy to one of Spellbound’s young crew, Flynn Hiddes, the son of another old friend with whom he competed in the Whitbread Round-the-World Race several decades ago, Henri Hiddes.

Earlier on Sunday, before the prizes were awarded and headline artist Flo Rida took the stage to continue the festivities, there was the not inconsequential matter of finalizing the scorecards with a series of races starting along St. Maarten’s southern shores. Race Committee Boat B set up shop in Simpson Bay and sent the CSA 5, Multihull 2, four Bareboat divisions and the cruising Island Time contingent on a single race to the isle’s southeastern point and back.

Meanwhile, stationed off Cole Bay, Race Committee A sent the Ocean Racing 1 division on a 27-nautical-mile jaunt to a mark south of Tintamarre and back to a finish in Simpson Bay. Ocean Racing 2, Multihull 1 and CSA 1 sailed a slightly shorter distance race of 22.5-nautical-miles, also concluding in Simpson Bay. The remainder of the top racing classes—CSA Sportboats 1 and 2, and CSA 2, 3 and 4—all sailed a pair of windward/leeward races south of the island. The folks cramming those spectator craft surely got their money’s worth.

The Ocean Racing 1 class, yet again, put on a terrific show, with the flashy red Volvo 70 I Love Poland off to her usual launched-off-the-starting line tricks. But on corrected time, the Poles have not been able to shake the pesky Australians on Grace O’Malley, and today’s action was no different. It all came down to this final race, which I Love Poland won, with Grace O’Malley taking third. That knotted the score at 10 points apiece, but the big Volvo won the class by version of the tiebreaking final contest.

As the Ocean Racers and the big Multihulls disappeared around Pointe Blanche, the Sportboats and smaller CSA competitors got down to the serious business of wrapping up their series. The windward/leeward format puts a premium on close-quarters boathandling and sharp tactics, and on Sunday, those who displayed superior crew work were amply rewarded.

The CSA 3 class consistently engaged in the regatta’s tightest and fiercest competition, and fittingly, it continued on the final day of the event. Sam Talbot’s J/111, Spike; Rob Butler’s Reflex 38, Touch 2 Play; and Pamala Baldwin’s J/122, Liquid, traded places on several occasions on the first, twice-around-the-course race. Spike’s fifth in that race looked to be the death knell to their hopes for overall victory, but they roared back with a first in the final race, evening the score at 14 points in a tie with Liquid, who recorded two seconds on the day. The crucial final win gave Spike the tiebreaker, in what was easily the event’s closest class.

“This regatta was just so much fun,” said Talbot, whose crew is based in the British Virgin Islands. “And it was amazing racing with Liquid, they’re a really, really good team. This is the first multi-day regatta we’ve sailed with Spike. We’ve got a great crew that we’ve put together over the years. It’s been a long, slow process, but we made it happen, and I couldn’t be happier.”

Heinefish crewmember David Pritchard, part of a team out of Lake Lanier near Atlanta, Georgia, said, “It’s the best racing I’ve done in big boats in a very long time. The round-the-island race was amazing. After nearly 40 miles we had 5 boats within a minute of each other, from Germany, Holland, all over the place. What a special regatta.” Nearly every crew could say the same.

For complete results for all 17 classes, visit www.yachtscoring.com.

As always on the concluding day of racing, the mad dash back through the bridge into the Simpson Bay Lagoon brought out all sorts of costumed crazies: large men in women’s bathing suits, pirates galore, a boatful of striped “Where’s Waldo?” impersonators, and plenty of sailors just happy to soak it all in with a cold Heineken. And of course, afternoon gave way to evening, and the music lasted well into the night. It was all Serious Fun. And with the 40th edition of the St. Maarten Heineken Regatta in the record books, it’s on to Number 41.

Contact racing@heinekenregatta.com for questions about the racing, classes and format.