After a sublime start and a reach up to Barbuda in beautiful conditions, the majority of the fleet experienced the first trap of the course. Just before sunset on the first day, the wind shadow of Barbuda enveloped the armada. The halt in progress was short-lived and looking on the bright side, Barbuda is a stunning spot to pause to watch the sun go down. After rounding the Barbuda mark, the fleet were back in the breeze heading west on a starboard gybe. Choosing when to gybe south to round Nevis would have been the main strategic call. Tactically, with the boats super-compressed, night fighting for wind and position would have taken on guerrilla tactic proportions.

MOCRA Class
Argo, PowerPlay, Maserati and Ultim’ Emotion 2 are having a fascinating battle at the front of the multihull class. Jason Carroll’s Argo (USA) and Peter Cunningham’s PowerPlay (CAY) pulled away from Maserati Multi70 (ITA) at Barbuda. Giovanni Soldini’s trimaran stalled in the wind shadow for longer and then proceeded to take a route north of the rhumb line, losing out 20 miles. Maserati fought back, passing Antoine Rabestem’s Ultim’Emotion 2 (FRA) before Nevis. As Argo and PowerPlay stalled in the lee of Saint Kitts, Maserati found superb boat speed to catch up with the leaders. PowerPlay was the first of the trio to escape the trap, blasting out at well over 20 knots of boat speed. However, Powerplay stalled at Saba and was reeled in by Argo, with Maserati just astern. Ultim’Emotion 2, sailed by Petro Jonker and Rick Warner is still in touch with the leaders. The 80ft Ultim was a late entry with a new team that will be ‘revving the engines’ for bigger breeze to come. The winner of the class will be decided by MOCRA time correction – Adrian Keller’s 80ft Catamaran Allegra (SUI) is estimate to be in pole position. 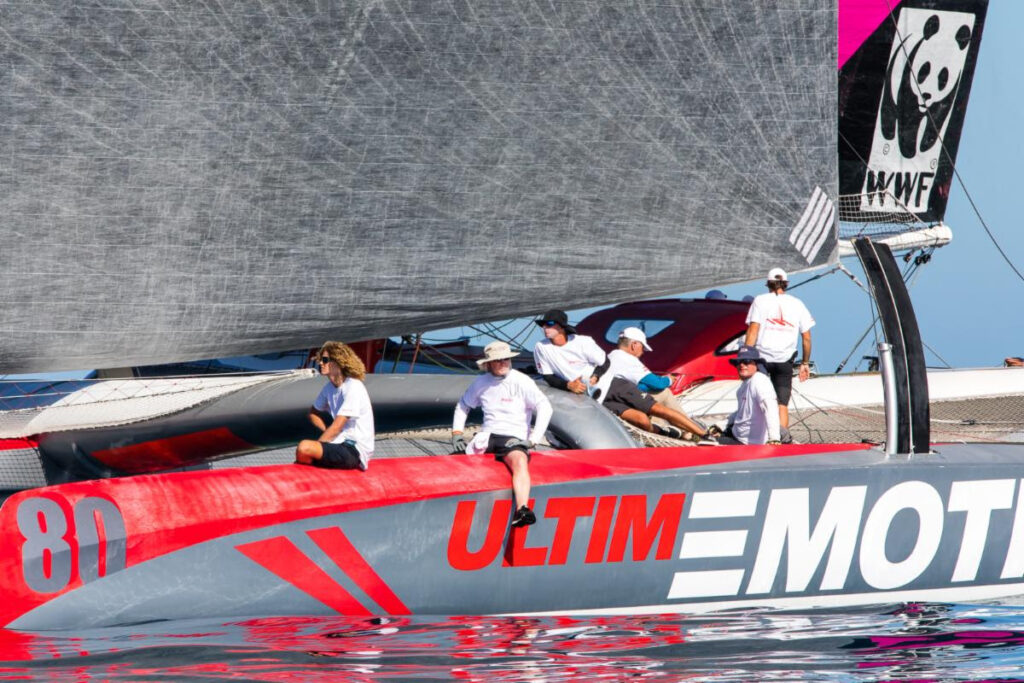 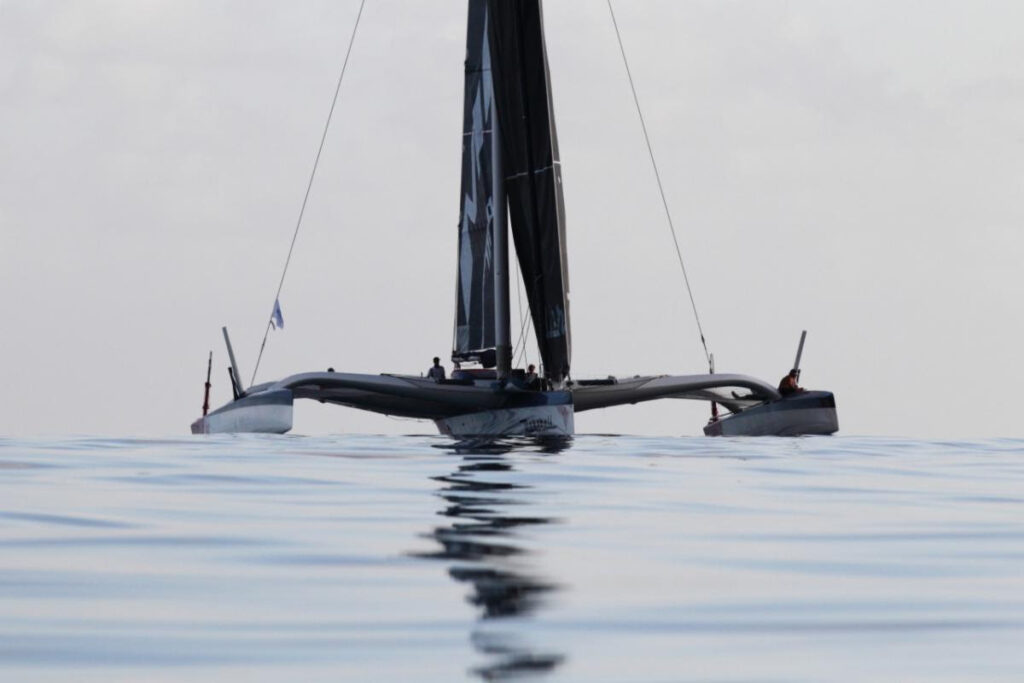 IRC Zero
At 1030 GMT on the second day, Tilmar Hansen’s TP52 Outsider (GER) is estimated to be leading the class after IRC time correction. Eric de Turckheim’s NMD54 Teasing Machine (FRA) is second. Mills 68 Prospector (USA), owned by Shelter Island Transatlantic Partners (Landry/Roesch/Siwicki) and skippered by Tery Glackin leads the class on the water, and is third in class. Prospector has put in a stunning performance early in the race, but Outsider made a winning move by going well offshore in the lee of St. Kitts, taking the class lead on the approach to Saba. Teasing Machine look to have picked up a good shift just before rounding Nevis to move up the rankings. 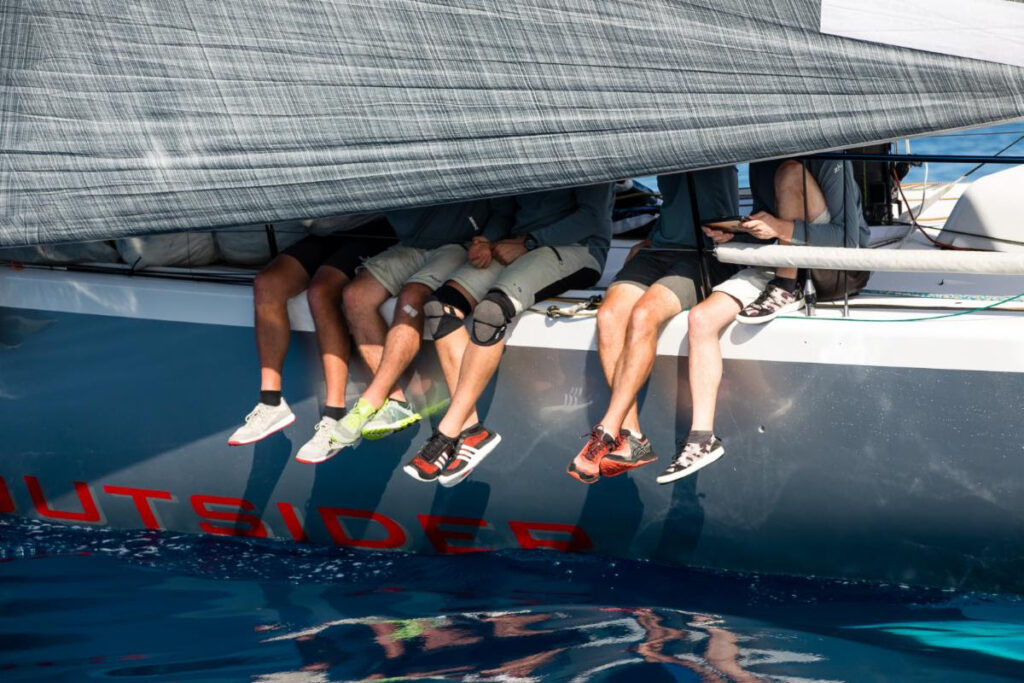 IRC One
After rounding the Barbuda mark, Philippe Frantz’s NMD 43 Albator (FRA) was the first to gybe south and looked to pick a perfect line to stay in the breeze and gybed west to round Nevis to perfection, leading the class on the water. Giles Redpath’s Lombard 46 Pata Negra (GBR) is estimated to be leading the class after IRC time correction and is less than a mile behind Albator. Bernie Evan-Wong’s RP37 Taz (ANT) had a busy night, putting in numerous gybes on the approach to Nevis; the work-out moves the Antiguan team up to third in class.

The Farr 58 Maiden skippered by Liz Wardley is competing in its first offshore race since her refit and since coming second in the 1989 Whitbread Round the world race. “The race is going well. We made good gains last night in the lee of Barbuda and then held our own in light downwind to Nevis. We are currently sailing past the gap towards St Kitt where we can see boats are once again becalmed… another transition zone to navigate through! The sun is just coming up, which is a welcome sight as it’s been a long busy night, but all is great on the mighty Maiden,” commented Liz Wardley on The Maiden Project’s blog. 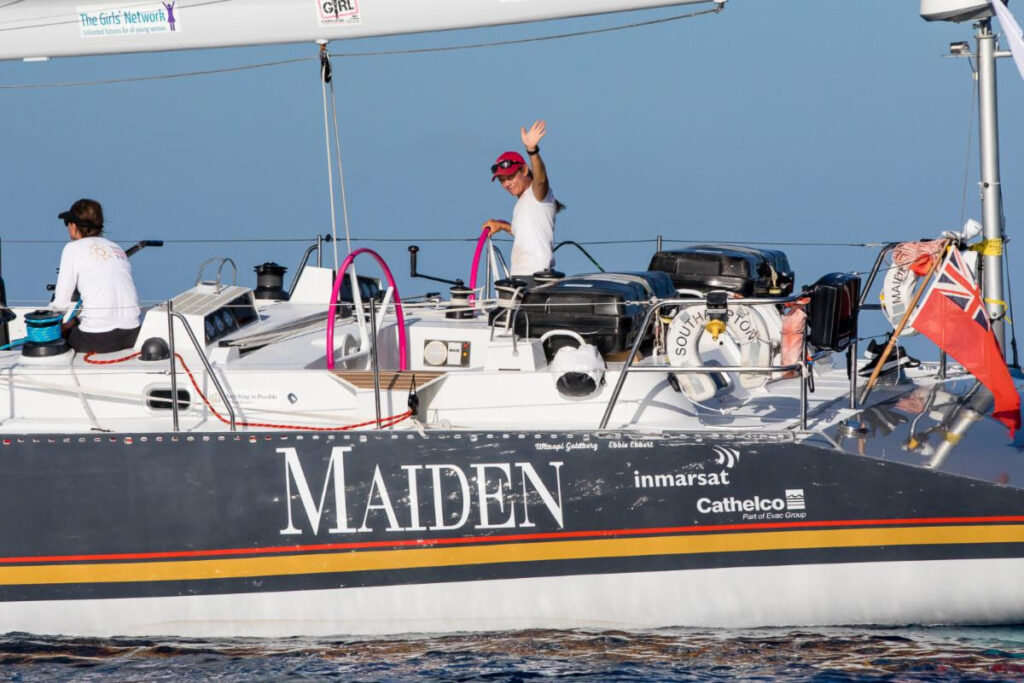 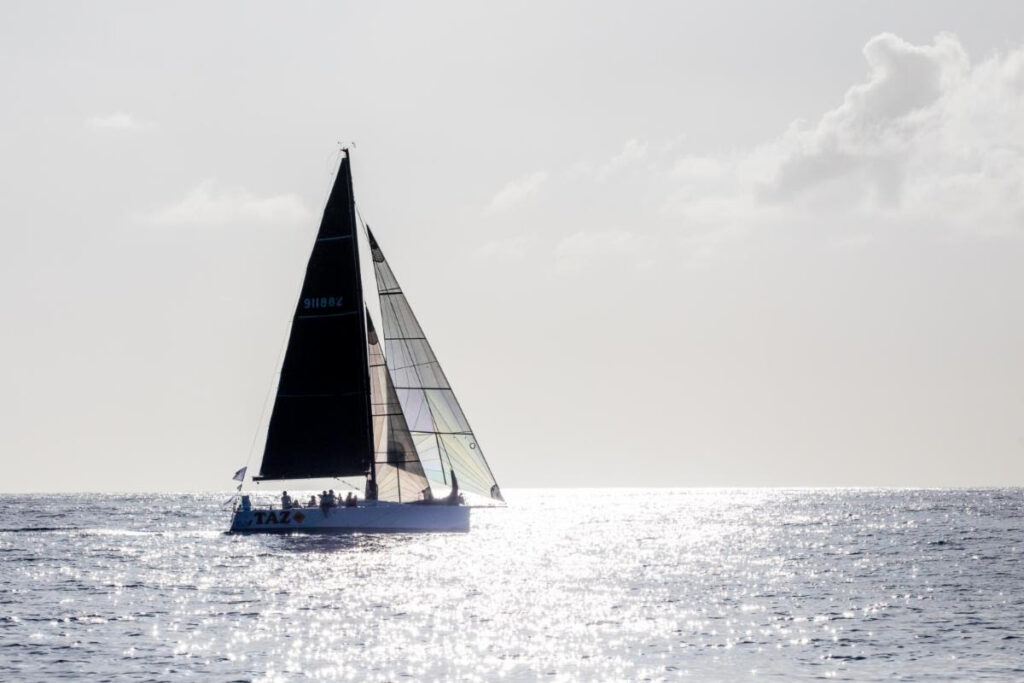 IRC Two
First 40 Optimus Prime, skippered by Dmitry Kondratyev (RUS) sailed fast and smart to lead the class at Barbuda. Global Yacht Racing’s Grand Soleil 43 Jua Kali (GBR), skippered by Gareth Glover, put in an early gybe after Barbuda which paid off in spades. Pamala Baldwin’s J/122 Liquid (ANT) was the first to reach Nevis, followed by Jua Kali and their sistership, Global Yacht Racing’s British First 44.7 EH01, skippered by Andy Middleton. EH01 rounded Nevis one Global Yacht Racing’s minute ahead of Ross Applebey’s Scarlet Oyster. After rounding Nevis, Liquid made good speed by using the acceleration around the island but then footed off west to avoid the wind shadow. Liquid surged into the lead both on the water and after IRC time correction.

Pip Hare racing on David Hall’s Grand Soleil 43 Panther commented: “Tough conditions for us up to Barbuda. We struggle against the lighter boats but the Code Zero has been a good friend. We’re all looking forward to rounding Nevis when we can officially say we got further than last time!” Panther rounded Nevis just before dawn this morning. Pip was referring to their retirement from the windy 2018 race with a torn mainsail. Panther have unfinished business and the crew are determined to finish the race. 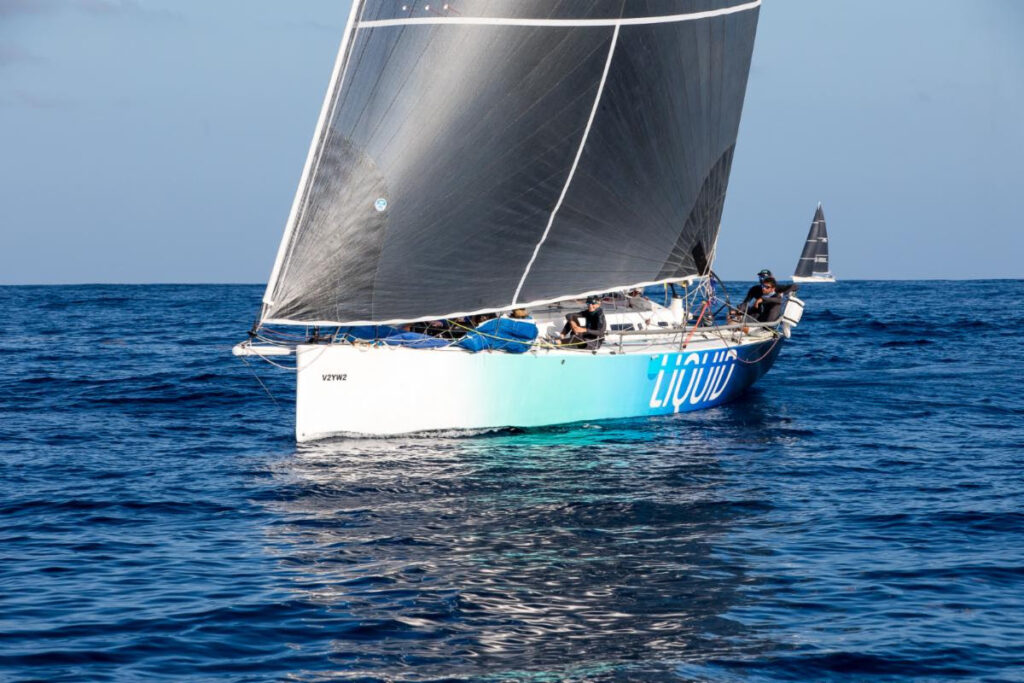 IRC Three
Jonty & Vicki Layfield’s Swan 48 Sleeper (ANT) was first in class to round the Barbuda mark just after sunset on the first day. Richard Palmer’s JPK 10.10 Jangada (GBR), racing Two Handed with Jeremy Waitt were well in tune with the shifts and the lightweight boat, the smallest in the race, was first in class to round Nevis. Jangada went offshore out of the lee of Nevis looking for breeze and they found it. First 40.7 Escapado, skippered by Stuart Dahlgreen (CAN) and Peter McWhinnie’s JPK 10.80 In theory also went offshore after Nevis. Seven miles behind the leaders Yoyo Gerssen’s Olssen 35 Cabbyl Vane (NED) is estimated to be leading the class.

The light conditions are favouring the smaller yachts for the overall lead under IRC. Richard Stain’s Sovereign 40 Laura is a prime example: “Home built in Cheshire, Laura finds herself in 11th IRC overall. How did that happen?” commented Richard via the race WhatsApp. 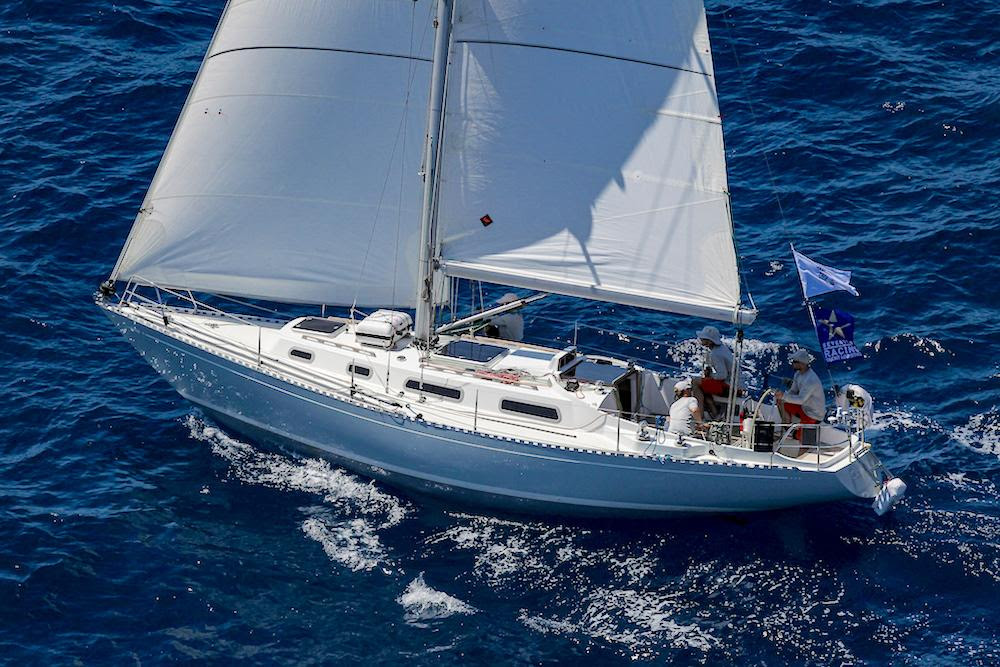 Class40
Arnt Bruhns’ Iskareen (GER) got a great start to the race opening up a big lead at Green Island. BHB, sailed by Arthur Hubert (FRA) passed Iskareen on the run. However, both Iskareen and BHB stalled in the wind shadow of Barbuda to watch their lead evaporate. Morgane Ursault Poupon, racing UP sailing (FRA) had a great turn of speed after Barbuda and made a stunning gybe south to snatch the lead all the way to Nevis. UP Sailing is giving away 10 years of design and development advantage to the competition, but racing superbly well.

Website: http://caribbean600.rorc.org/
The Live page will be updated throughout the race with blogs from competitors, photos, video and audio.