BATTLE lines have been drawn and the gauntlet thrown firmly down as the 2019 Optimist World Championship’s top ranking sailors prepare to thrash it out on the water in Monday’s hotly anticipated finals.

Sunday’s high winds and vigorous current saw an intense day of racing, resulting in a mixed bag of successes and losses for the young competitors.

Host nation Antigua’s famed trade winds once again packed a punch for the pint-sized participants, who are aged between 11 and 15 and hail from 65 countries across the globe.

A smart, strategic move left Team Spain’s Jaime Ayarza, 13, third in the leader board after securing a first and a second place in his two races.

“It was a difficult day because it was very windy and I am light. But I went over to the left side near the coast and got some good wind,” he said.

“I am looking to do my best tomorrow for the last day. The secret to being a good sailor is being confident and staying focussed. I give my best every time and don’t give up,” he added.

Jaime is among the 60 sailors in the tournament’s gold fleet, with the remainder of the 255 competitors divided into silver, bronze and emerald according to their performance in last week’s qualifiers.

“It was a very bad day for me,” he said, his disappointment palpable.

“I went right and everyone else went left and got a lot of wind off the cliff. I lost several places, maybe as many as 25.”

Initial results on Sunday left him in 103rd position.

Still, Luke is determined to enjoy his last couple of days in Antigua before flying home this week.

“I love how warm the water is; I’ve been swimming every day. I’m really looking forward to swimming with stingrays on Tuesday,” he added.

And with gusty winds predicted for Monday, he knows he is going to have to up his game.

“I will have to hike a lot and stay strong,” he said.

One team that trained specifically with tough winds in mind is USA.

Thommie Grit, 15, said the four boys and one girl had really enjoyed the waves and swell after practicing hard overseas before heading to Antigua this month.

It has paid off with four of the team in the top 40 placed sailors.

“Our training was pretty hardcore,” he recalled. “We sailed in St Thomas and Fort Lauderdale to get warmed up and in shape.

“The starts were really difficult on Sunday because the current was pushing everyone back. I managed to pass a lot of people by surfing waves,” Thommie added.

For many of the sailors, including those from Antigua and Barbuda, the event is their first major regatta.

Coaches and team leaders have been busy keeping up morale among the slower racers.

“The conditions are very challenging,” said Trinidadian coach Marvin Bernard, whose three charges are ranked between 244th and 249th.

“But the boys are doing their best, having fun and enjoying the country and that’s the main thing. The wind has picked up a lot this week which has given them more experience and is helping them learn,” Bernard said.

“I keep talking to them and motivating them; they are only young and will have more opportunities later on.”

Antigua’s national team are also in the lower third of the leader board but spirits remained high on Sunday with the marking of Theodore Spencer’s 13th birthday.

Meanwhile, one sailor from Australia earned high praise from regatta organisers for stepping forward to help out a fellow competitor who ran into difficulty at the dockside earlier in the contest.

“I saw one of the Latvian team capsize with no foils which meant he could not pull up his boat,” related Jonathan Tuite, 14.

“One of his team mates helped him get his boat upright. I noticed his foils started flying away so I retrieved them and helped him get them back on.”

Monday’s finals will begin at 11am in Nelson’s Dockyard. European teams continue to dominate the leader board’s top spots with two-time defending world champion Marco Gradoni of Italy in first position, followed by Malta’s Richard Schultheis in second and Spain’s Ayarza in third.

The 2019 World Champion will be crowned at a special ceremony on Monday at 7.30pm in Nelson’s Dockyard. Gold, silver and bronze medals will also be given out, along with prizes for the top boy, top girl and first 20 sailors.

The evening will culminate with a buoyant live performance by Antiguan band, Spirited. 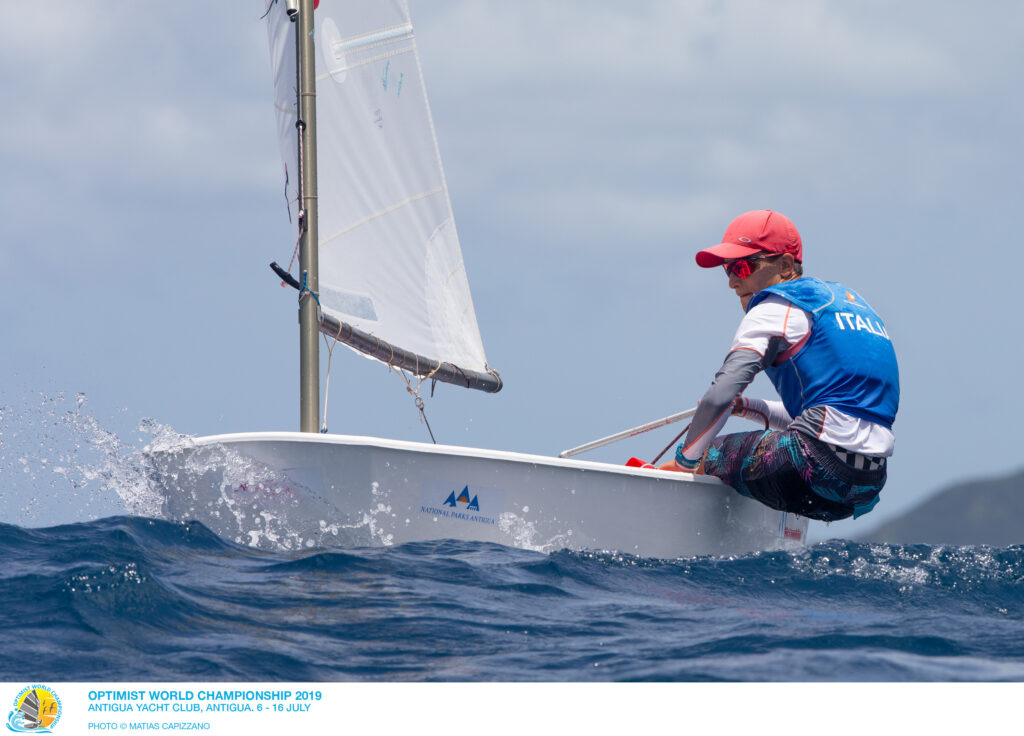