Bart’s Bash; Great sailing for a wonderful cause!

Last Saturday the Sint Maarten Yacht Club (SMYC) took part in the sixth edition of Bart’s Bash and saw 30 sailors participate in 5 different classes; Laser, Optimist, RS Vision, Laser Pico and Sunfast 20s. Bart’s Bash is a global sailing event with thousands of sailors participating at 257 venues from 31 different countries in every type of boat imaginable. The event is a fundraiser for the Andrew Simpson Foundation or a project of the Club’s choosing. This year it was decided to raise funds for the youth sailing programs on the Northern Islands of the Bahamas, after they sustained massive destruction by hurricane Dorian earlier this month.
The competitors headed out to the racecourse in a brief shower of rain with a good breeze. All classes sailed 4 races in challenging conditions. “The wind got a bit stronger during the afternoon and was very shifty. Towards the end of the final race the wind direction completely changed, adding an extra challenge for us competitors. It was fun to be racing against students I have taught while I was an instructor at the SMYC. Overall it was a fun day on the water” said Max van der Pol, RS Vision sailor and former sailing instructor at the SMYC.
There were 6 Optimist sailors out on the course showing great talent. Rio Stomp got third place, with Adriaan Coppelmans in second place and the overall class winner was Emma Lennox, who after an intense start of race 1 where she capsized on the start line, managed to make an impressive comeback with bullets in all other races. 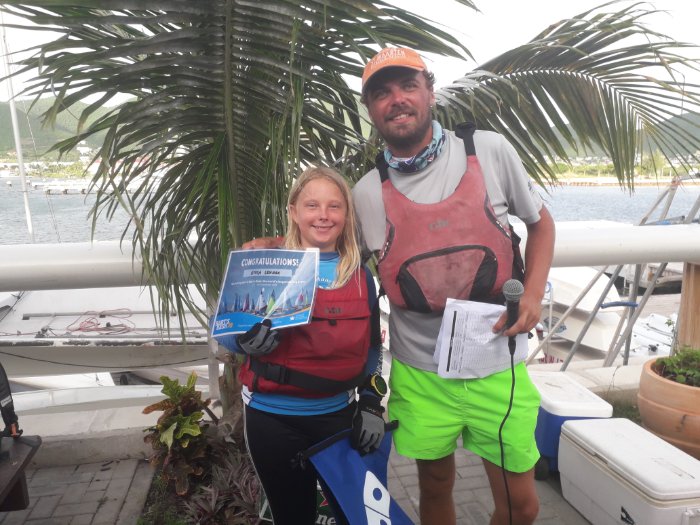 Four teams sailed in the Laser Pico class. Jayden Aventurin and Melina de Vries showed great progress by winning third place in this class. It was a very close race between first and second place, and in the end Ajani Blake took second place with Louka Williams in first.

Summer Jean Morton and Mathijs Detering dominated the RS Vision class with 4 bullets for the overall win. For the rest of the class, the competition was fierce and the scoring was close, with the family teams Arthur and Caii Banting taking second place and Ajani and Veronica Destin ending up third.

The Laser fleet was very well represented with 6 participants. SMYC board member John Leone returned to the racecourse after a 3 year break from Laser sailing, showing great effort and organizers are hoping to see him back on a regular basis. Ryan Hope-Ross, a new SMYC Sailing Committee member, helped recruit participants for the event and did well himself with a 4th place finish. The talented teenage brother and sister, Justin and Jordan Pieterse, took home 3rd and 5th place. The true superstars in this class were veteran Laser sailor Frits Bus and Christopher Cilliers, with the latter taking home the overall class win.

Two teams, captained by Garth Steyn and Robbie Ferron joined the racing in Sunfast 20s. Tied for points after 4 races, Garth Steyn ended up claiming the overall first place in his class, as he won the final race of the day.

“This year we had the largest group of participants for Bart’s Bash since its initiation in 2014. There were a lot of fun and unexpected teams out on the water which looks promising for the upcoming sailing season. The RS Visions sailed tight which showed in the close results. The Optimist class saw some great talent, including Emma Lennox, class winner, who sailed this event as her final preparation race before she heads off to the North American Championships by the end of the month,” commented Reinier Calkhoven, Sailing Instructor at the SMYC. 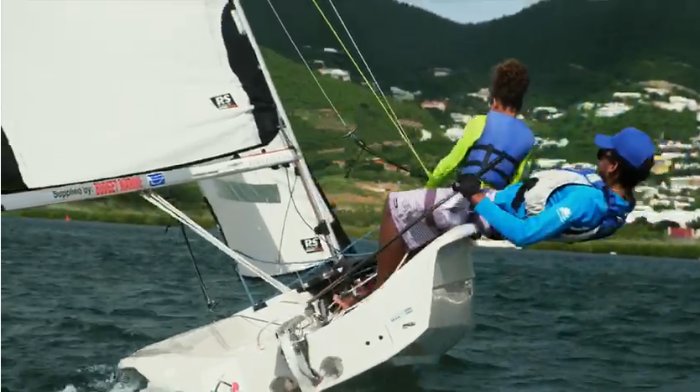 The racing wasn’t the only successful and fun part of the day, the fundraising efforts collected a total of $1,300 for the Youth Sailing Programs in the Bahamas. A car wash collected $575 and “the Goods”, a pop-up shop, collected $135 in the morning, in the afternoon these funds were complimented through a raffle and additional donations with another $600 to bring the total of fundraising efforts to $1,300.

“In previous years we raised funds for the Andrew Simpson Foundation or the Sint Maarten Yacht Club Sailing Program, this year we decided to help the Bahamas, more specifically, the youth sailing programs affected by hurricane Dorian. Having sustained significant damages in hurricane Irma ourselves, we understand how difficult it is to raise funds as a sailing school. The importance for kids to have some distraction and fun by going back sailing is something that can’t be underestimated, we saw it here ourselves 2 years ago, so having these funds available will mean a lot to the programs in the Bahamas,” explained Michele Korteweg, General Manager of the SMYC.

Bart’s Bash is the flagship annual event of the Andrew Simpson Foundation. Inspired by the memory of Olympic Gold and Silver medalist Andrew ‘Bart’ Simpson MBE, who died in a sailing accident during a training session for the America’s Cup. He passionately believed that everyone should have the chance to try sailing and enjoy the many benefits that it brings.