Youth2Adult — Y2A — is a series of articles celebrating sailing’s role in youth development for Caribbean children.

“I felt proud as I watched our Marine Vocational Program students climb comfortably aboard the boats and immediately become racing team members — their ease       to integrate showed me that they have become real boaters,” says CEO of the Marine Vocational Program (MVP) in St. Thomas, Jimmy Loveland. Collaborating with the Boys and Girls Club of St. Thomas and the Carlos Aguilar Match Race (CAMR)  regatta organizers, they advance sailing development and marine vocational training with St. Thomas and St. John disadvantaged youth. Occurring each fall for the last ten years in St. Thomas, the two-day, high-level match race event has evolved to include hands-on experiences for local youth. As part of the overall event, the one- day CAMR Youth Regatta 2018 saw local girls, boys and young adults sailing with visiting yachtswomen from France, Great Britain, the Netherlands, Sweden and the USA who were competing in the Women’s International Match Racing Series hosted by the Carlos Aguilar Match Race.

Members of the Boys and Girl Club of St. Thomas had the opportunity to sail with world-class racers

Vocational Program (MVP) in St. Thomas, Jimmy Loveland. Collaborating with the Boys and Girls Club of St. Thomas and the Carlos Aguilar Match Race (CAMR)  regatta organizers, they advance sailing development and marine vocational training with St. Thomas and St. John disadvantaged youth. Occurring each fall for the last ten years in St. Thomas, the two-day, high-level match race event has evolved to include hands-on experiences for local youth. As part of the overall event, the one- day CAMR Youth Regatta 2018 saw local girls, boys and young adults sailing with visiting yachtswomen from France, Great Britain, the Netherlands, Sweden and the USA who were competing in the Women’s International Match Racing Series hosted by the Carlos Aguilar Match Race.

Match racing is sailed in two identical boats around a short course, providing fast action close to the crowds on shore. The intense racing is just as exciting for the spectators as it is strategically, tactically and physically challenging for the competing crews, and the CAMR courses, right off the Charlotte Amalie waterfront, provide excellent viewing. 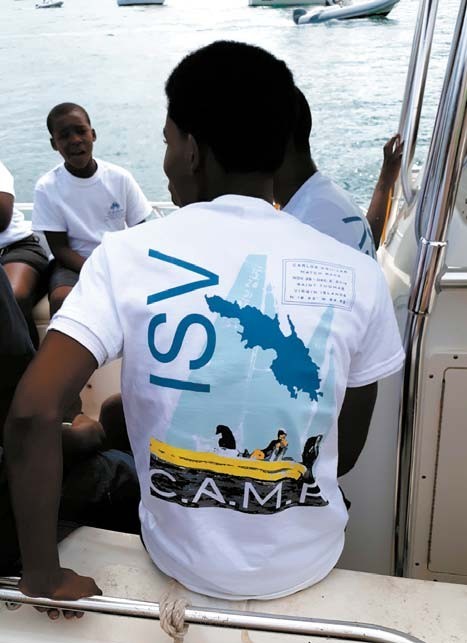 “Students of the Marine Vocational Program and members of the Boys & Girls Club St. Thomas/St. John have learned that sailing a boat calls for quick action, a blend of feeling the wind and water as well as with the very heart and soul of the boat itself. Sailing has taught our students alertness and courage, and gives back a joyousness and peace that other sports cannot offer. They raise the sails with strong hands and go after the opportunities that arise in life at sea. They are not a drop in the ocean but are the ocean in a drop.”

From carlosaguilarmatchrace.com: While the memory of Carlos Aguilar is embedded in the hearts of family and friends, it will forever be inscribed on the Caribbean Sea. It is there that his mentoring is played out again and again by the young sailors he counseled and loved. Since his death in October 2007, they continue to sail them- selves to new heights and undoubtedly will pass down his nautical wisdom to their own children one day.

For Carlos, there could be no better tribute. Sailing was in his blood. As a young boy growing up in El Salvador, he spent many a weekend sailing on a nearby     lake. His competitive spirit came from his father, who sailed for El Salvador in the 1968 Olympics.

Carlos found himself in the Virgin Islands after graduating from college in Kansas with a degree in architecture. He answered an ad from an architectural firm on St. Thomas, and decades later, the island remained his home.

Friends appreciated his generosity and attention, often expressed through his talents as someone unusually clever with his hands and gifted with keen instincts. Bill Canfield will never forget Carlos pushing aside Bill’s efforts to remodel his home, changing the dwelling into one that truly made sense for a person of limited mobility. Just days after Carlos died, Beth and Bruce Marshall moved into the home he had designed for them, finding carefully placed notes on exactly how they should use their space.

To many, Carlos was a quiet presence — an enigma — dignified, handsome in his polo and khakis, always willing to return a smile, respond hello but never one to insinuate himself or spend his conversation on casual  acquaintances. He stayed in the background. Except when it came to young people. He had a natural gift that endeared them to him. He was salty, and he challenged them. But he was kind, and always ready to have fun.

This regatta is a tribute to the type of sailing that Carlos most loved, and to the   spirit and loyalty he engendered in those he touched. Here’s to sailing, and to his mantra that friends and loved ones regarded as his signature wisdom: “Let it go.”

The CAMR is a World Sailing (WS)-provisional Grade One event. The format features a full round robin of all teams followed by knockout quarterfinals for the top eight, then knockout semi-finals, petit-finals and finals. The event is sailed in the IC24, a modification of the J/24.

The CAMR is known internationally for introducing young sailors to the sport, working cooperatively with the US Virgin Islands’ government and USVI Department  of Tourism in its efforts to get more of the islands’ youth out on the water. As such,    the event hosts the CAMR Youth Regatta each year.

Carol Bareuther reported: “The 2018 Women’s International Match Racing Series finale was held during the Carlos Aguilar Match Race in St. Thomas, USVI, from November 29th through December 2nd. Twelve teams from France, Great Britain, the Netherlands, Sweden and the USA participated. The WIM Series is the first and only professional sailing  series  for women, hosted by the Women’s International Match Racing Association (WIMRA) and joined by the world’s leading women match racing sailors.”

Bill Canfield, President of Virgin Islands Sailing Association: “The VI Sailing Association is extremely proud of the accomplishments of our junior sailors over the past two decades. We are now working hard to get more of the islands’ youth to feel part of our events and get out on the water. As an island nation, we are behind some of our neighbors in this effort but feel it is an important part of our ongoing function to push each and every regatta to introduce a few new young faces to an on-the-water experience. It is our feeling that introducing our natural water environment to more and more local islanders may change their lives for the better. The Carlos Aguilar Match Race is proud to be part of that effort.’

However, Canfield notes, “There is a core group of five or six of us that have been carrying the event since Day One. As a group, we decided to go out on top. It was a wonderful event for ten years.” He stated that the event’s organizers have come to an impasse related to obtaining the annual sponsorship required to run the event. No 2019 CAMR is scheduled.

Call to action: Is there any individual or organization poised to financially keep CAMR afloat?

Visit bgcusvi.org for more information on the Boys and Girls Club of St. Thomas.

Ellen Birrell attributes her opportunity to cruise the Caribbean aboard S/V Boldly Go  to life skills built in childhood in coastal southern California. Believing swimming and sailing, along with reading, writing, arithmetic, music and art, are essentials for island youth, she supports youth development through writing and networking. Reach her at ellenbirrell@gmail.com

This article first appeared in the Caribbean Compass. See caribbeancompass.com