12th January, Race Update: Day Five: At 0800 UTC on the fifth day of the RORC Transatlantic Race, three 70ft trimarans are under 1,000 miles from the finish at Camper & Nicholsons Port Louis Marina Grenada. Giovanni Soldini’s Maserati Multi70 (ITA) is 782nm from the finish, leading the multihull class. MOD70 Zoulou (FRA) with Erik Maris at the helm is second, with 906nm to go and Frank Slootman’s MOD70 Snowflake (USA), skippered by Gavin Brady is third, 913nm from the finish. Follow the race here: http://rorctransatlantic.rorc.org/tracking/2023-fleet-tracking.html 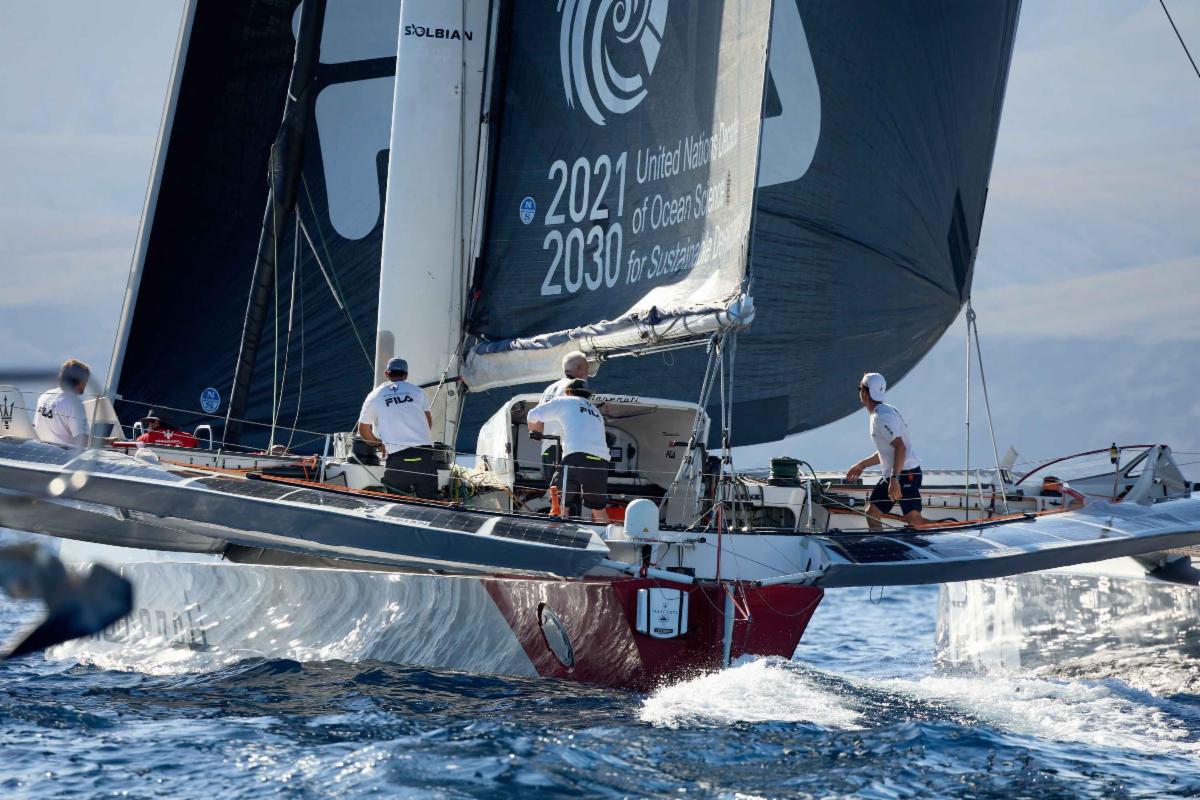 Maserati has been setting the pace, including breaking the trimarans outright speed record of 37 knots! All three multihulls have been blasting along at over 30 knots of boat speed.

However, it has not been all plain sailing for the Italian leader, Maserati. “Last night we realised that the vibrations of the rudder unscrewed the pintle of the hull. We had to cut the lid off the ballast and Matteo was covered with carbon dust!” commented Soldini via social media. 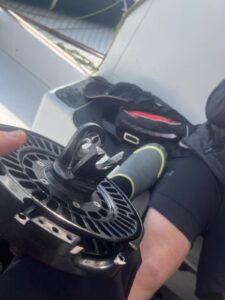 Image above: Running repairs on board MOD70 Snowflake © Stu MacKinven

Snowflake is also making good running repairs on Wednesday, Stu MacKinven commented from onboard Snowflake: “At about 1 am (ship time) our gennaker furler did itself mischief and decided to let the tack go. Bit of a wrestle to get the gennaker under control and on deck. The lads did nice work to undo furling line and get into the J0 furler and we free-hoisted the gen again, and off we go. Lost a few miles to the other two multis, but good recovery.”

MOD70 Zoulou (FRA) with Erik Maris at the helm is 126nm behind Maserati, but race fans will remember that last year’s winner Maserati was about the same distance behind PowerPlay (now Zoulou) in 2022. Zoulou is positioned much closer to the rhumb line than her rivals, so it is likely that the deficit will reduce as the teams approach Grenada.

The saying ‘to finish first-first you must finish’ is most definitely applicable. However, RORC Racing Manager Steve Cole commented: “The current leader is Maserati and will need to finish before 12:46:03 UTC on Saturday 14th January to break the Multihull Race Record. Maserati’s current ETA is 17:30 UTC Friday 13th January, which will knock about 18 hours off the record. 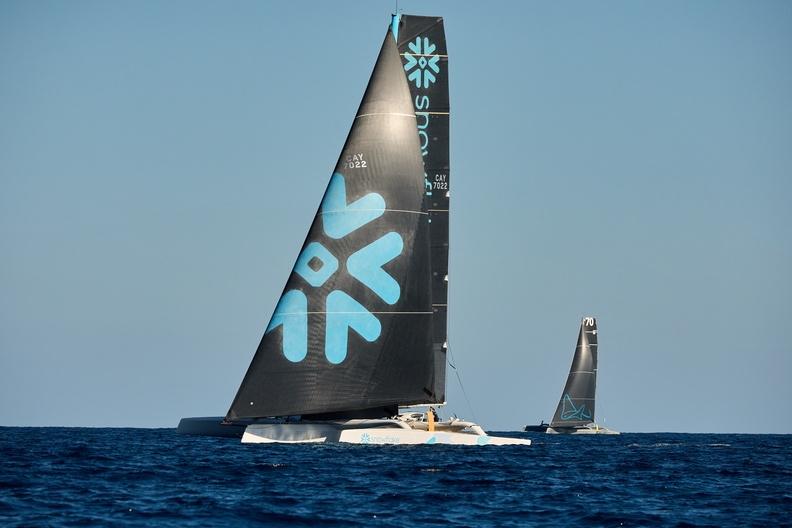 As the front runners in the Monohull fleet approach the halfway mark, contenders for the overall win under IRC are emerging. Eric de Turckheim’s NMYD Teasing Machine (FRA) is 1,784nm from the finish and leading after corrected time by just over one hour from Botin 56 Black Pearl (GER), sailed by Stefan Jentzsch. Volvo 70 I Love Poland (POL), skippered by Grzegorz Baranowski is ranked third overall under IRC and leads the fleet for Monohull Line Honours for the IMA Transatlantic Trophy. Henri de Bokay’s Elliott 52 Rafale (GER) is ranked third in IRC Zero and fourth overall. 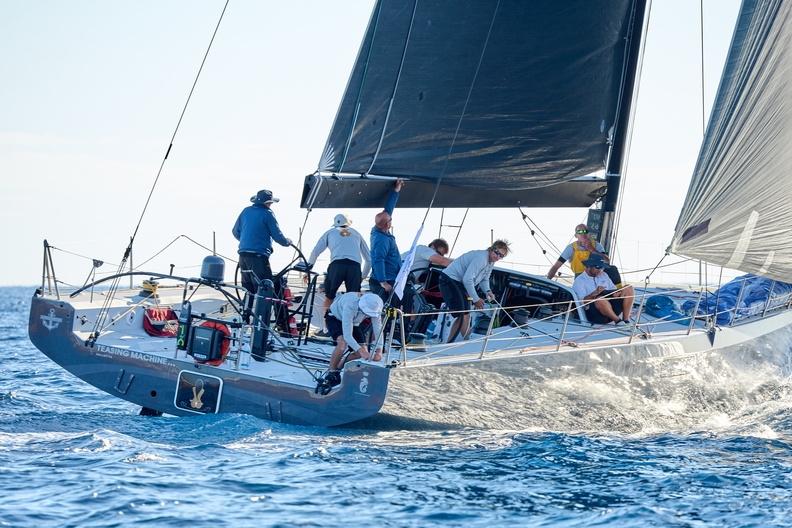 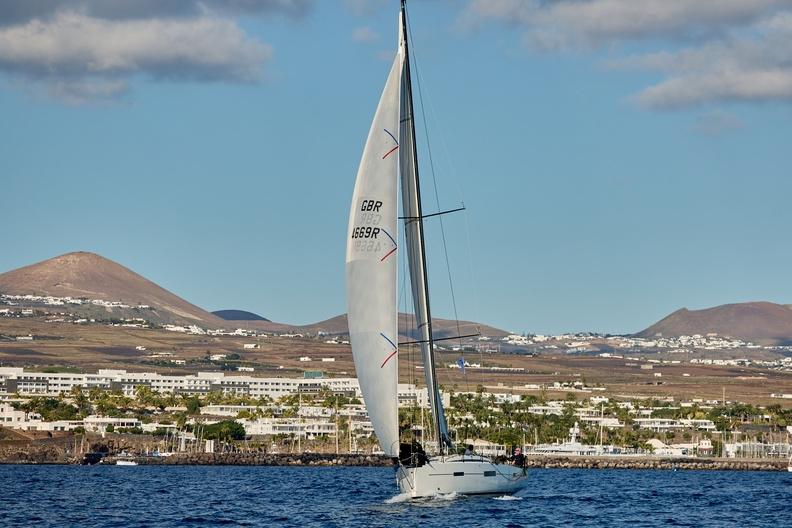 In IRC One, Andrew & Sam Hall’s Lombard 46 Pata Negra (GBR) is leading the class after IRC time correction with 2,115nm to go and sent in this report: “All good aboard Pata Negra. Pleased with our passage through the Canaries. Having some champagne offshore sailing – topped out at 28kts overnight. Currently sailing under A4 at a solid 13-18kts. Just overtook a whale… Happy with our position on the race course. Just be nice if the lead big boys slowed so we could catch up a little!”

The father and son duo; Peter & Duncan Bacon’s Sun Fast 3300 Sea Bear racing Two-Handed are ranked second in IRC One, just 9nm behind Pata Negra. Laurent Corbin’s First 53 Yagiza (FRA), skippered by Philippe Falle has made a strategic move north of the rhumb line. The additional miles sailed drop the team to third in IRC One, but if the gybe north pays off, that could well change. Global Yacht Racing’s First 47.7 EH01, skippered by Neil Maher has raced 183nm in the last 24 hours and is ranked fourth in class.

Kate Cope & Claire Dresser racing Two-Handed in Sun Fast 3200 Purple Mist (GBR) sent in a detailed blog about life on board. http://blog.mailasail.com/purplemist. The Day Three report describes in detail the effects of a big squall that required enormous tenacity and experience to find the solutions to sail wraps of epic proportions. Happily, today all is good on Purple Mist, be it slower progress: “Welcome to Day 4 on a small boat in a big sea. Morning has broken and it’s a cloudy sky with big cumuli nimbus clouds …that’s the stormy ones. The wind is a heavy 20-25kts and increases to 32kts as the stormy squalls pass overhead. We’ve two reefs in the main and the teeny tiny orange storm jib. After “spinnaker-gate” yesterday we can’t fly any proper jibs as the forestay (the front wire that holds up the mast) still has the S2 tangled around it. So, it’s just the storm jib.” 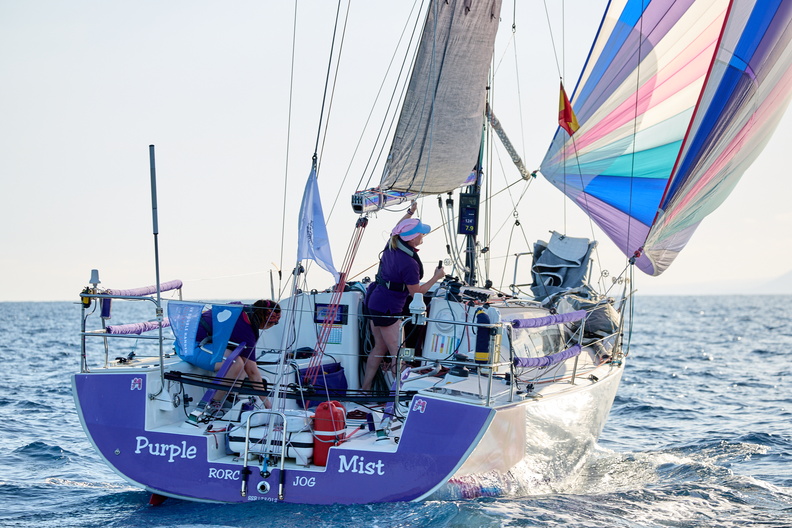 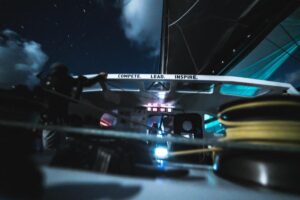 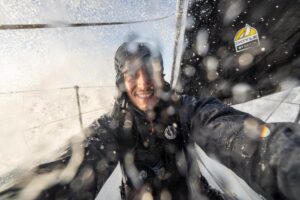