The 11th edition of the RORC Caribbean 600 attracted 76 teams from 21 countries and crews from six continents. The highly diverse fleet were challenged by the tough conditions and captivated by the beauty of a stunning race course. The non-stop 600 mile race around 11 Caribbean islands is unique and very much on the bucket-list of any offshore sailor.

“All the classes had amazing competition and many finished the race just minutes apart, especially in the battle between Maserati and Argo, and the Class40s,” commented RORC CEO Eddie Warden Owen. “There were a lot of new boats and faces at this edition and the quality of the fleet and sailors continues to impress every year. The weather served up classic trade wind conditions which makes the race a challenge, but also a fast and exciting one.”

For the 2019 edition, David and Peter Askew’s Wizard (USA) is the first Volvo 70 to win the race and the eighth team from the USA to lift the RORC Caribbean 600 Trophy. “Awesome,” commented David Askew. “This is the first time we have done this race and to win it overall is beyond our wildest possible dreams. I really can’t believe it.”

“Wizard planing at 25 knots – that is what makes this race so great and there is always something going on around these beautiful islands. This is the first time I have been to Antigua and the welcome has been phenomenal,” added Peter Askew. 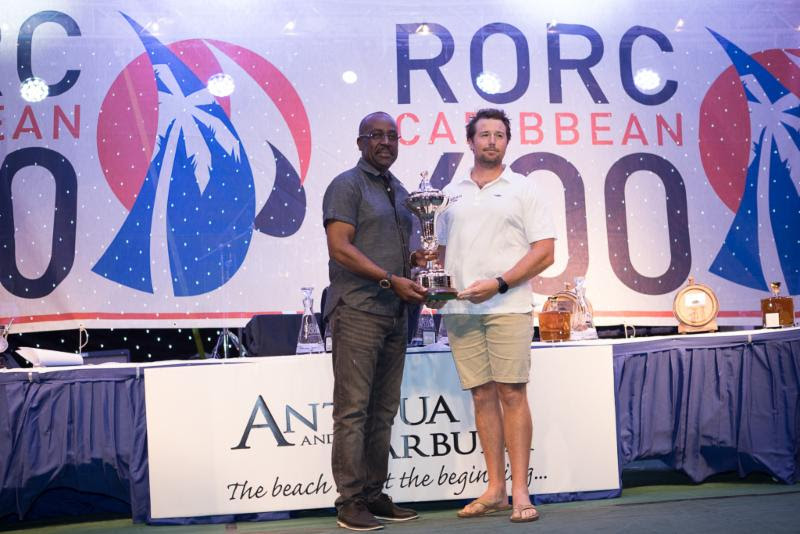 Maserati Multi 70 skippered by Giovanni Soldini (ITA) crossed the finish line of the RORC Caribbean 600 in an elapsed time of 1 day, 06 hours 49 minutes and 00 seconds, taking Multihull Line honours and setting a new Multihull Race Record. Jason Carroll’s MOD70 Argo (USA) also beat the previous record, but finished the race just seven minutes behind Maserati. Forty eight hours before the start, Argo capsized in training. A herculean effort got her back into the race, with both multihulls recording over 30 knots of boat speed. At Redonda, the final island of the course, Argo made a great tactical move to close the gap on Maserati and an intense match race provided the final chapter of a fantastic story.

“We had a wonderful race; very windy, very fast, with very good manoeuvres from both teams,” commented Giovanni Soldini. “We had some technical problems and after Guadeloupe, we could see Argo all the time, they just kept getting bigger and bigger. From Redonda to the finish we used classic match racing tactics, trying to keep ourselves between Argo and the finish. We are so very happy to have won.” 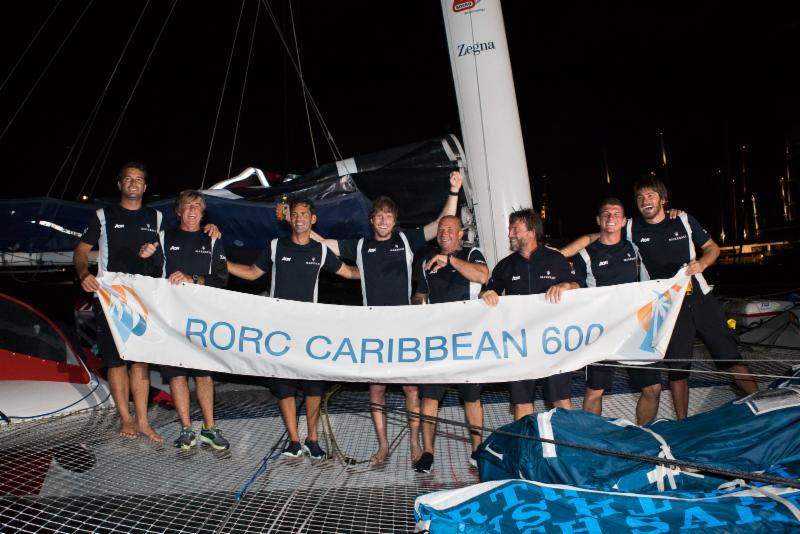 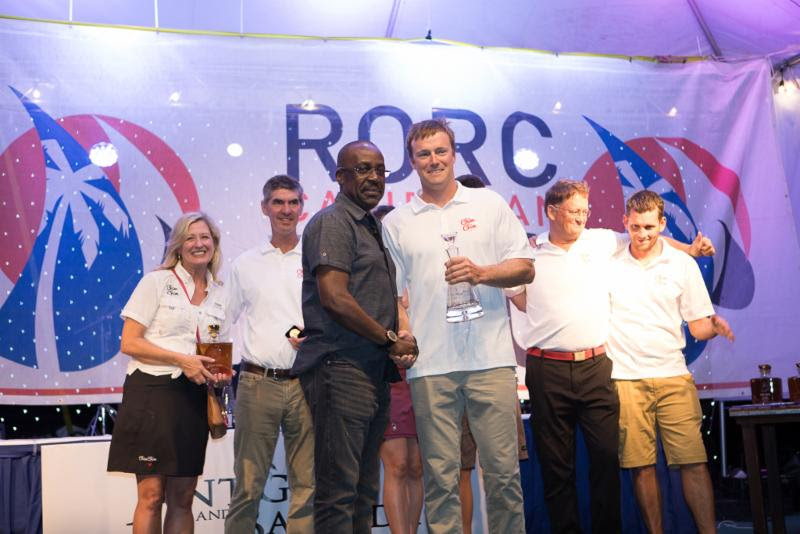 The overall winner of the MOCRA Class was John Gallagher’s Gunboat 62 Chim Chim: “My impression of the RORC Caribbean 600 is like it’s an entire Caribbean racing season in two days of sailing! It feels great to win the class. We had a great crew and pushed the boat really hard, which was fun and it is nice to get a good result, have a great time and nobody got hurt,” commented Gallagher on the dock in Antigua.

Ten teams from France, Norway and Brazil formed a race record entry for the Class40 Division. After two and a half days and nights of intense competition and over 600 miles of racing, it all came down to just a few minutes. Catherine Pourre’s French Class40 Eärendil won Line Honours for the Class40 Division for the second year in a row, defeating two of the rising stars of offshore racing who had both led for parts of the race. Aymeric Chappellier’s Aïna Enfance Et Avenir was second by just 3 minutes and 20 seconds. Completing the podium was Luke Berry’s Lamotte – Module Création, less than six minutes from victory.
“That was an amazing, intense race,” said Catherine Pourre. “The key factor was having the right sails for the different legs and superb crew work. It was match racing all the way and we were really under pressure all of the time. Last year we were battling against the elements; this year we had really good competitors that we could see all the time. The contest never faltered day or night.” 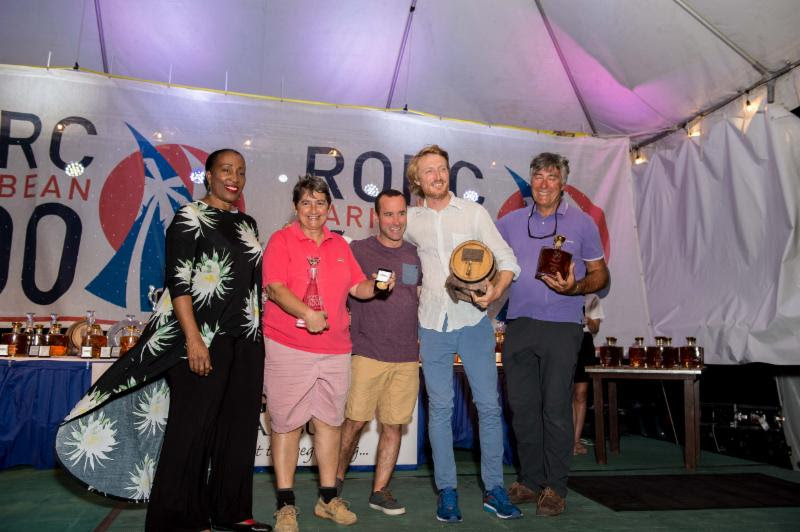 IRC Zero accounted for the top three yachts overall under IRC. Wizard was first, with two British based yachts filling the podium. Botin 52 Tala was second, with Ker 46 Lady Mariposa, skippered by Nigel King, in third. The magnificent Baltic-built superyacht Nikata was the winner of the Superyacht Class, Will Apold (CAN) racing Southern Wind 96 Sorceress was runner up.

Gibb Kane’s Swan 66 Bounty (USA) was victorious in IRC One, with Andrew Berdon’s Marten 49 Summer Storm (USA) in second and Pata Negra, chartered by Daniel Heine and skippered by Andy Liss (GBR) was third with a crew from Lake Constance, Germany. “The conditions were really good for Bounty and she is a very comfortable boat, but you still get some aches and pains when you are over 70! It was a fun race. We have sailed a lot together and we have had a lot of experiences where we didn’t quite win, so this race is very special,” commented Bounty’s Gibb Kane, winner of IRC One. 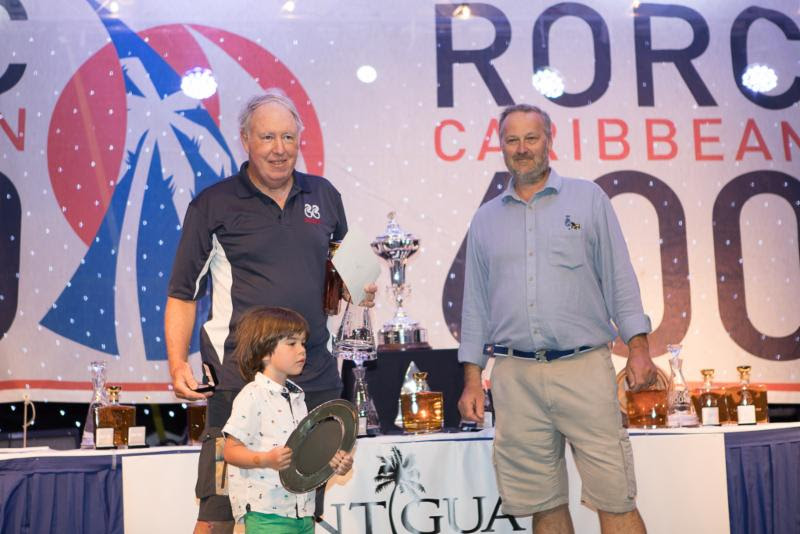 IRC Two was won by Scarlet Oyster, this is the sixth class win for the Oyster 48 and the seventh for the Oyster 48’s skipper Ross Applebey (GBR). Scarlet Oyster was also the winner of CSA 2. Performance Yacht Racing’s Beneteau First 47.7 EH01, skippered by Andy Middleton was a close second, with Pamala Baldwin’s J/122 Liquid (ANT), skippered by Julian White (GBR) taking third place in the competitive class.

“We had a good tussle with EH01 the whole way round and have never sailed harder in this race. It was like we were tied together with a bit of bungee cord,” commented Scarlet Oyster’s Ross Applebey. “We went inside Cades Reef at the end; I am not sure if it was faster, but we did it anyway! It’s flatter water and it’s pretty, but I wouldn’t do it in the dark!” 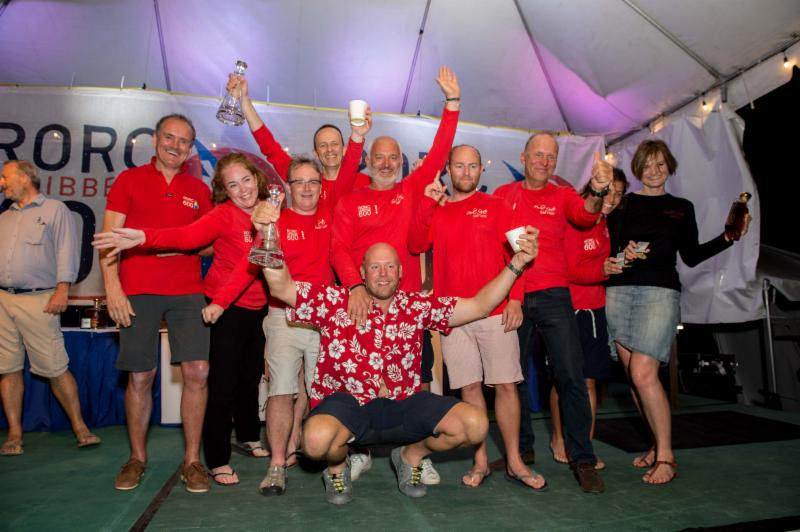 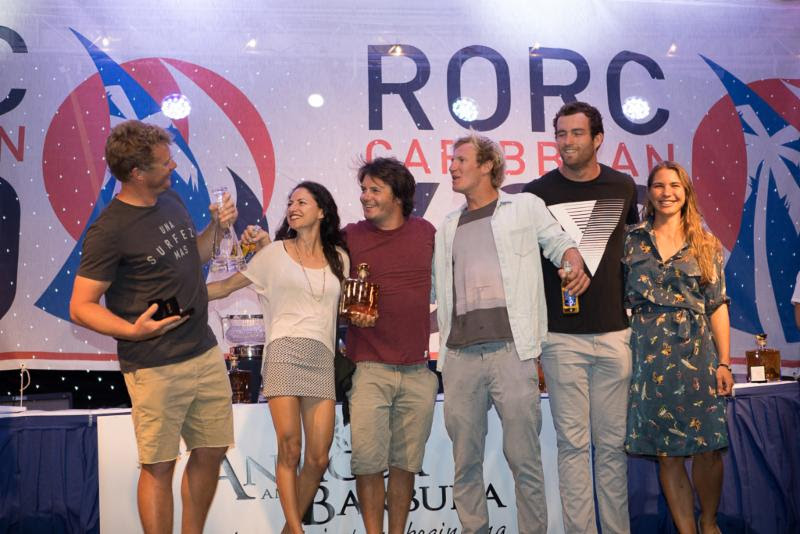 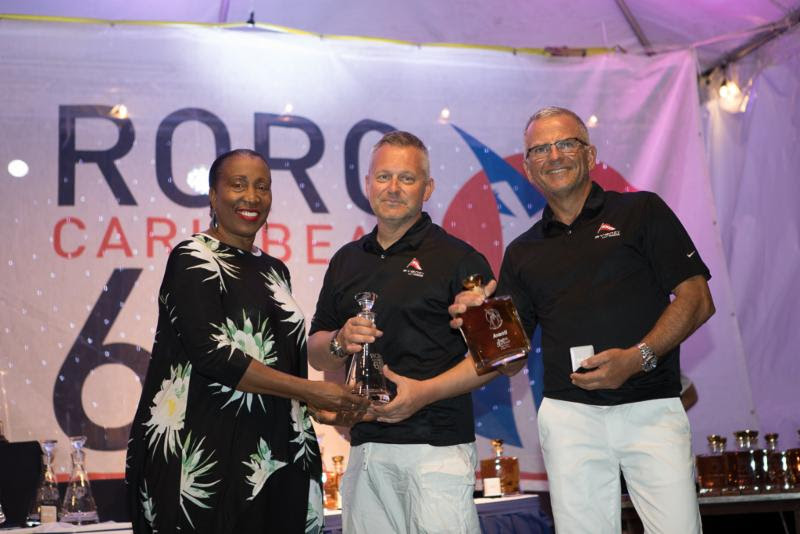 “The crew were superb; a credit to themselves,” explained Sleeper X’s owner, Jonty Layfield. “It’s hard work on a boat like this; 16 tons and 50 years old – it’s not easy. We are a crew of friends and I wouldn’t have it any other way; the atmosphere on board is just fantastic!” 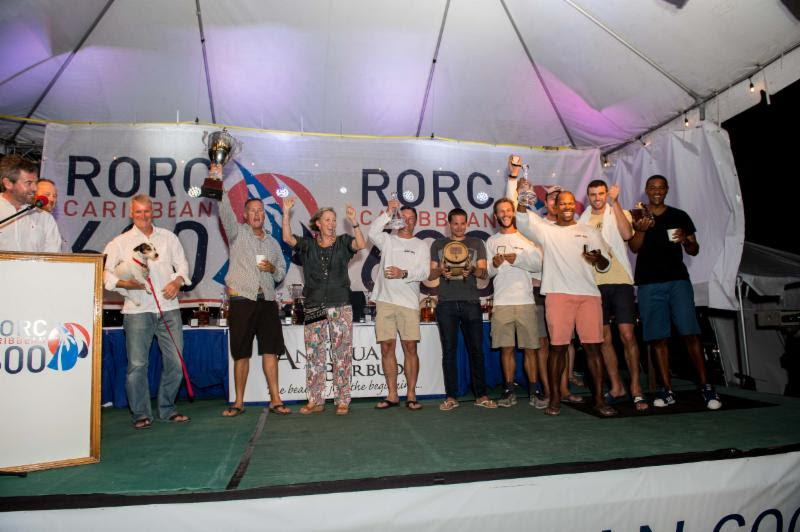 Prizes were presented at the 2019 RORC Caribbean 600 awards ceremony held at Antigua Yacht Club by: The Hon. E.P. Chet Greene, Ministry of Foreign Affairs, International Trade and Immigration; Shirlene Nibbs, Consultant to The Ministry of Tourism, and the Commodore of Antigua Yacht Club, Franklyn Braithwaite, GOH. Panache Steel Band opened the evening and competitors danced the night away to Asher Otto and Itchy Feet.

For results, all the latest race reports, videos, photos and news go to: http://caribbean600.rorc.org 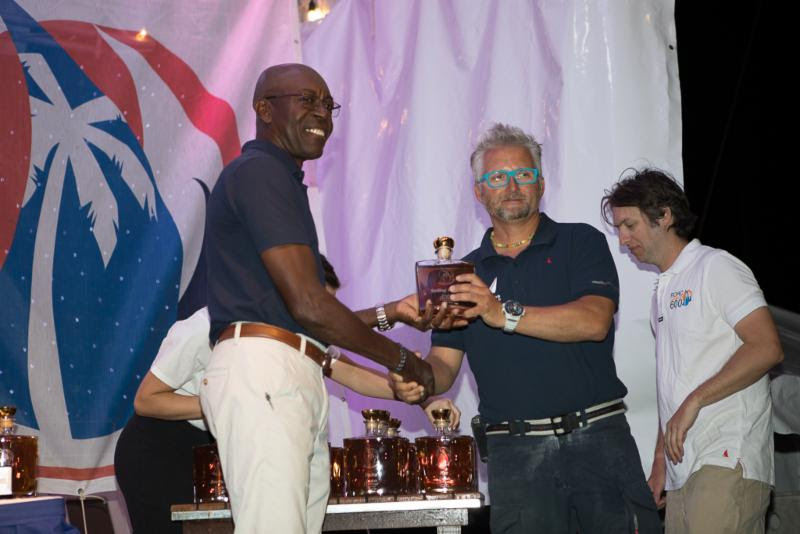 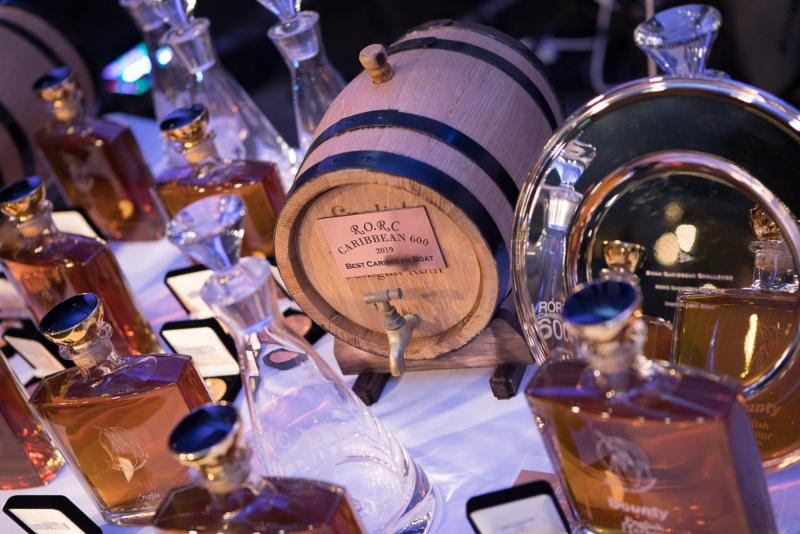 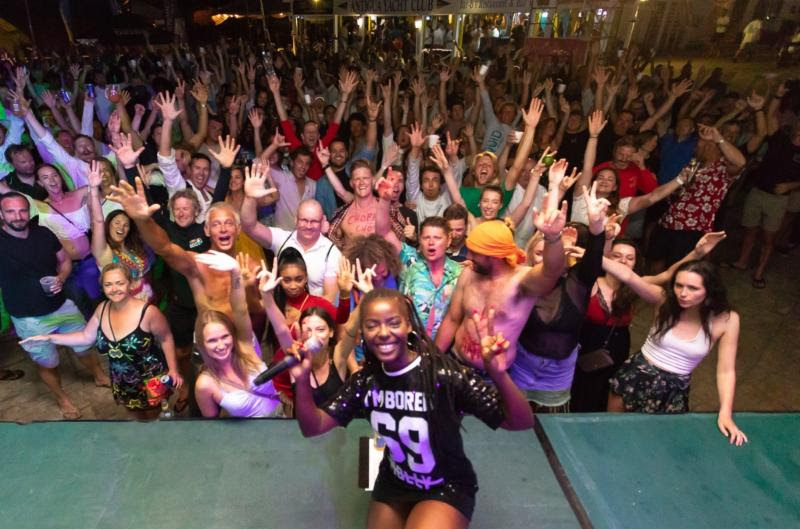 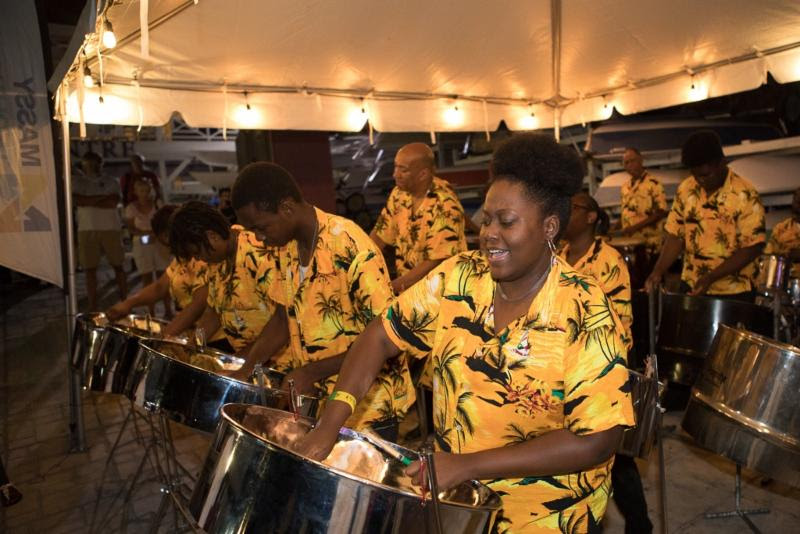 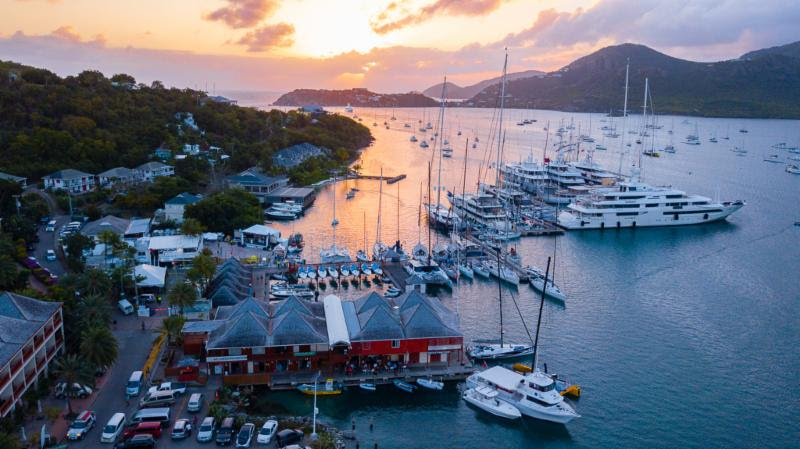 As the sun sets on Falmouth Marina, competitors get ready to party at the final awards ceremony © Arthur Daniel/RORC