The 2020 RORC Caribbean 600 prize giving was held on Friday 29th February celebrating a fascinating race. 700 sailors from 37 countries, joined by the Antiguan yachting community, gathered at the Antigua Yacht Club for a grand finale to congratulate winners. All of the participating teams were honoured with a personalised souvenir in the shape of decanters, suitably filled with English Harbour 5-year-old Rum!

The overall winner of the 12th edition of the RORC Caribbean 600 was Tilmar Hansen’s TP52 Outsider (GER), skippered by Bo Teichmann. Outsider is the first German boat to lift the RORC Caribbean Trophy, breaking a seven-year winning streak of winners from the USA. Runner-up was the defending champion, David & Peter Askew’s Volvo 70 Wizard (USA), which also took Monohull Line Honours. One of the smallest boats in the race was third, Peter McWhinnie’s JPK 10.80 In Theory (USA).

“This is a great race, one of the greatest experiences in my 38 years with this team,” commented Tilmar Hansen. “We kept going and that is down to excellent teamwork and a well-prepared boat. Outsider is not just a German boat, the team is also from Australia, Denmark, USA, Poland, Netherlands and Austria. Congratulations to the RORC for their meticulous organisation and also to Antigua for the fantastic welcome.” 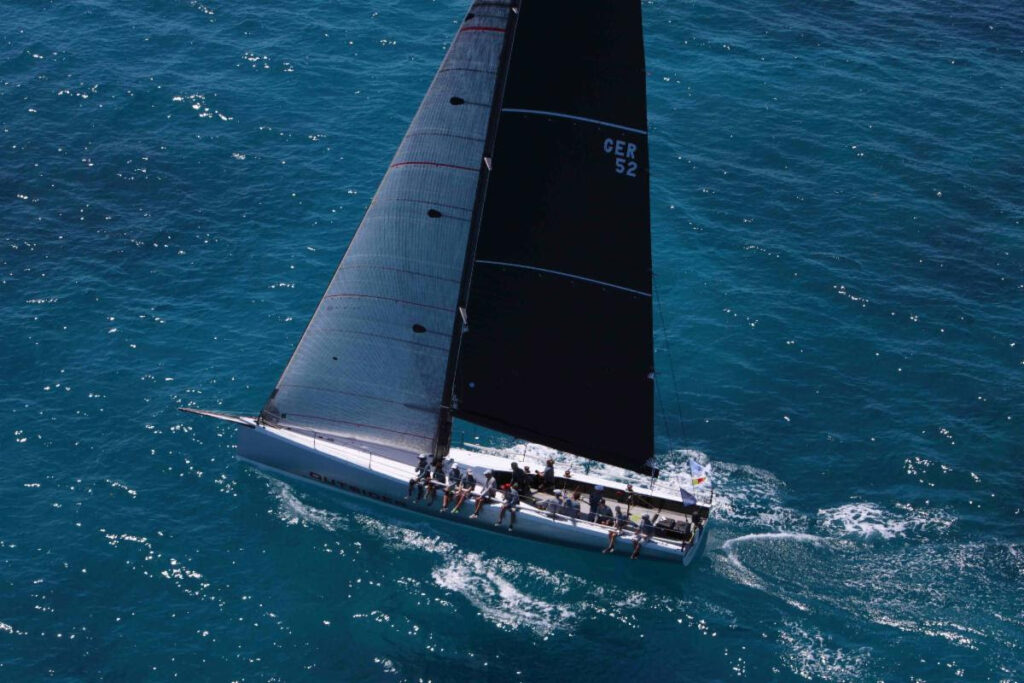 Tilmar Hansen’s TP52 Outsider (GER) at the start of the 12th edition of the RORC Caribbean 600 © Tim Wright/Photoaction.com 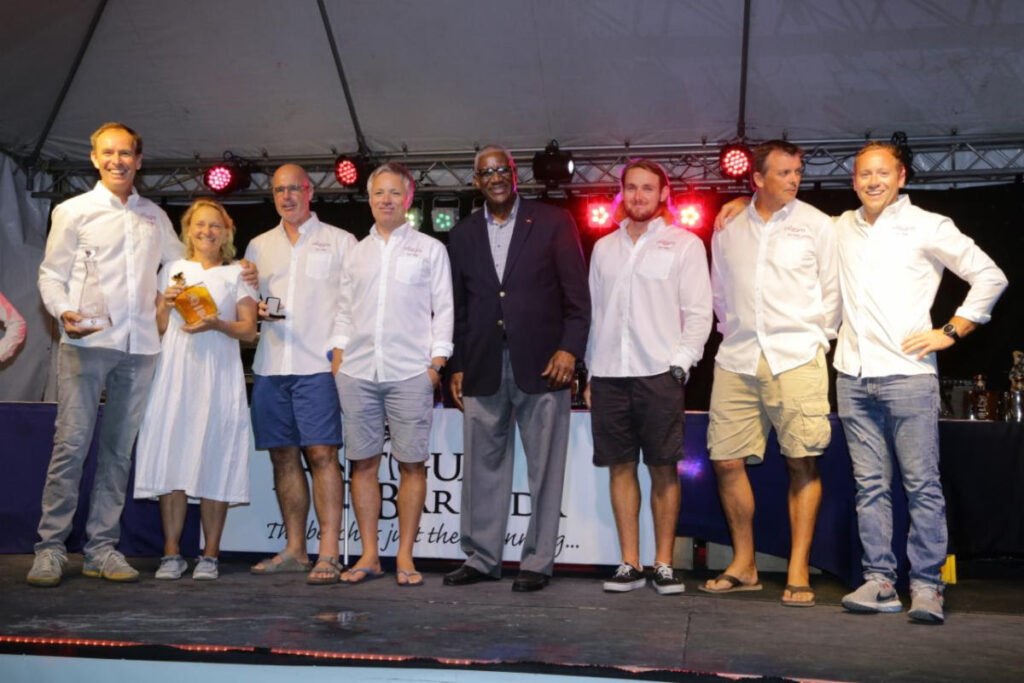 “We enjoyed the sailing and these boats, especially in this race when we have hours and hours of fast reaching, surfing away,” commented Giles Redpath. “The crew are all friends and there is a lot of camaraderie and an extremely nice atmosphere on board. We had some beautiful moments such as breaching whales near Barbuda. This is a very special race with stunning scenery and always boats to race with, anywhere on the course – a lot of fun!” 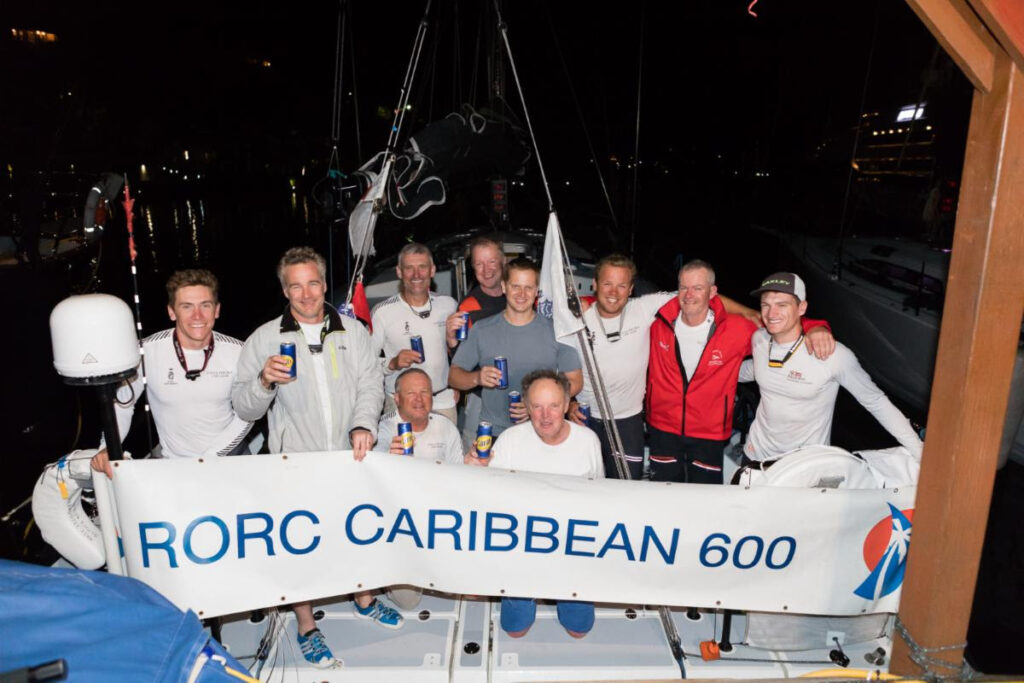 “That was easily the toughest race I have done both mentally and physically, there was so may twist and turns,” commented Ross Applebey. “The close racing with young friend Jules (White), and of course Andy (Middleton) with EH01 saw us stick together with a bungee for half the race. When you get parked up you have to regroup and come back, and our crew just kept working – they were incredible. It was a real war of attrition the whole way around. You invest so much into this race, to try and do the best you can, and this year it was very close.” 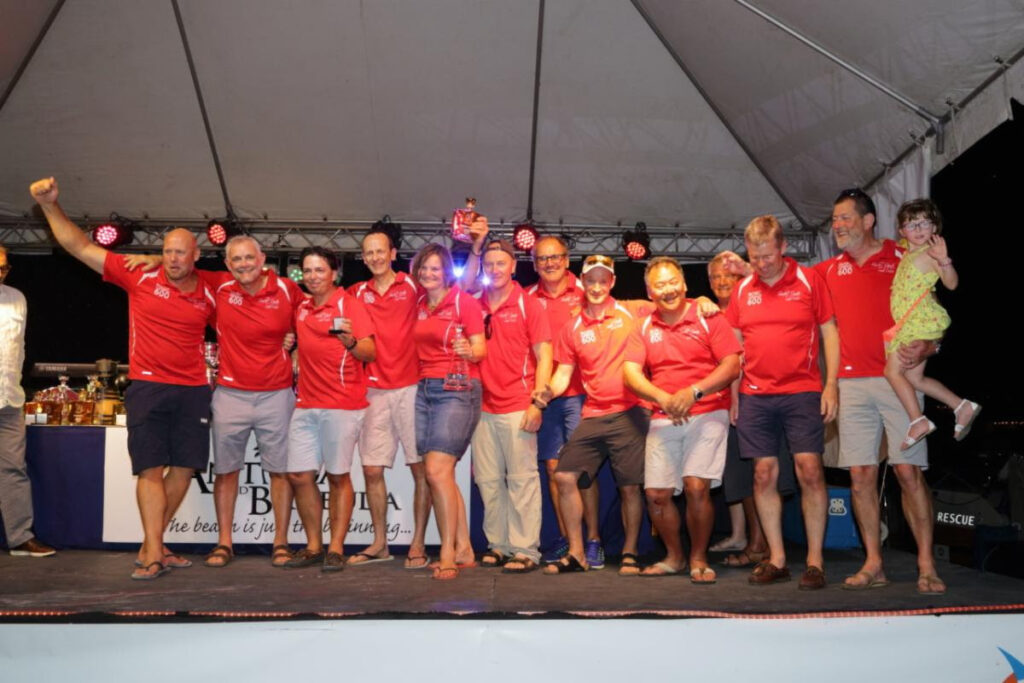 “The team are very experienced and in Long Island Sound we have learnt a few tricks on how to keep going in light airs,” commented Peter McWhinnie. “The biggest gain during the race was in the lee of St.Kitts. We kept going and stretched out six miles on our class. If the wind had not dropped off on Thursday, we would have had a real chance of winning the race overall. The team is all Corinthian and we are really happy with our performance.” 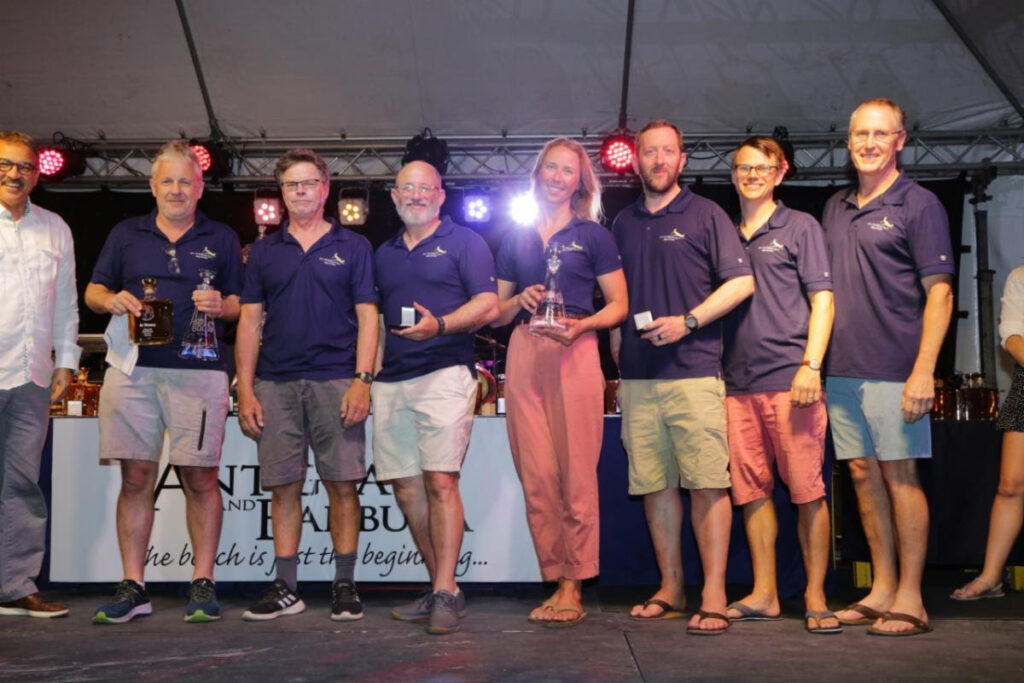 “Our boat is designed for really strong wind, so it was a bit tricky for us, but we really enjoyed the race – fighting with other boats,” commented Arthur Hubert. “BHB is really powerful reaching but we knew UP Sailing would be faster in the light. So the overall strategy was to keep close to them in the light and attack when the wind was stronger. Up Sailing is also from St. Malo so we are friends but there was no talking between us when we were racing. This race is really good for getting data to develop the boat because we sail at many wind angles and wind speeds. BHB has come second twice, so to win was very satisfying.” 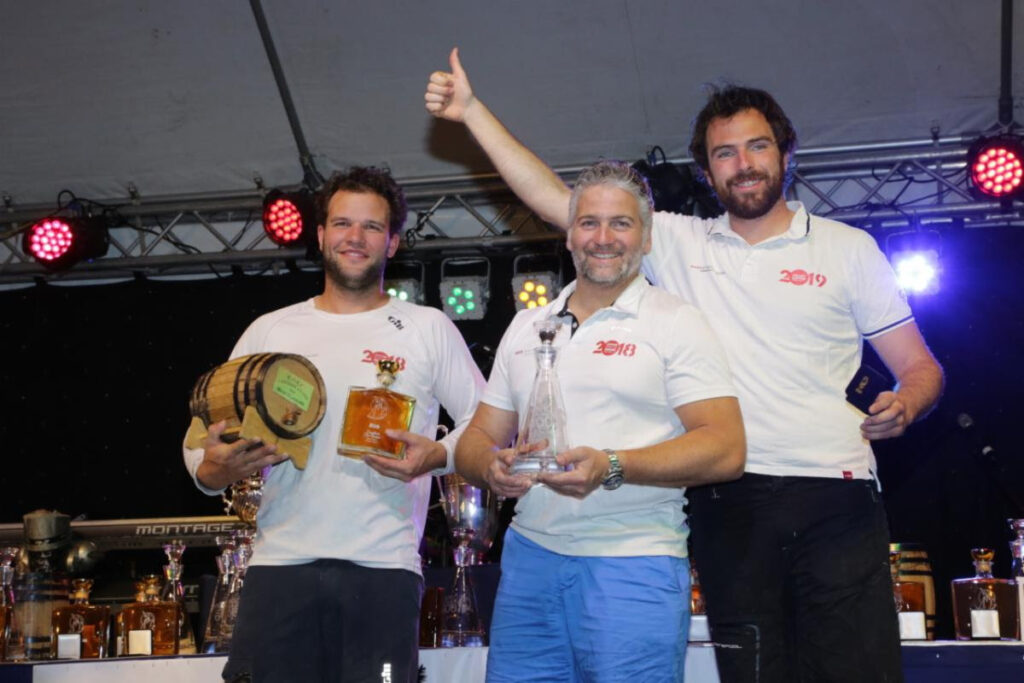 The last boat to finish the race, Cabbyl Vane, arrived the morning after the prize giving. The 1974 Ohlson 35 has been beautifully restored and optimised for offshore sailing. Last year the Dutch brothers, Yoyo and Jan Gerssen raced Two Handed but retired, exhausted in the tough conditions. This year they were joined by Sam Frampton and Gertjan Andel. A huge gathering at the Antigua Yacht Club cheered their arrival.

“This means so much to us,” smiled Yoyo Gerssen. “We were determined to finish the race and that is down to the crew and a great boat. Racing 600 miles in Cabbyl Vane is a long way but she was solid and so were the team. It was never in doubt that we would finish and Jan will make his flight back to Holland today! It means so much to me and my brother, a big thanks to him, to Sam and Gertjan, and of course to the RORC for the 600 – it is a wonderful experience.” 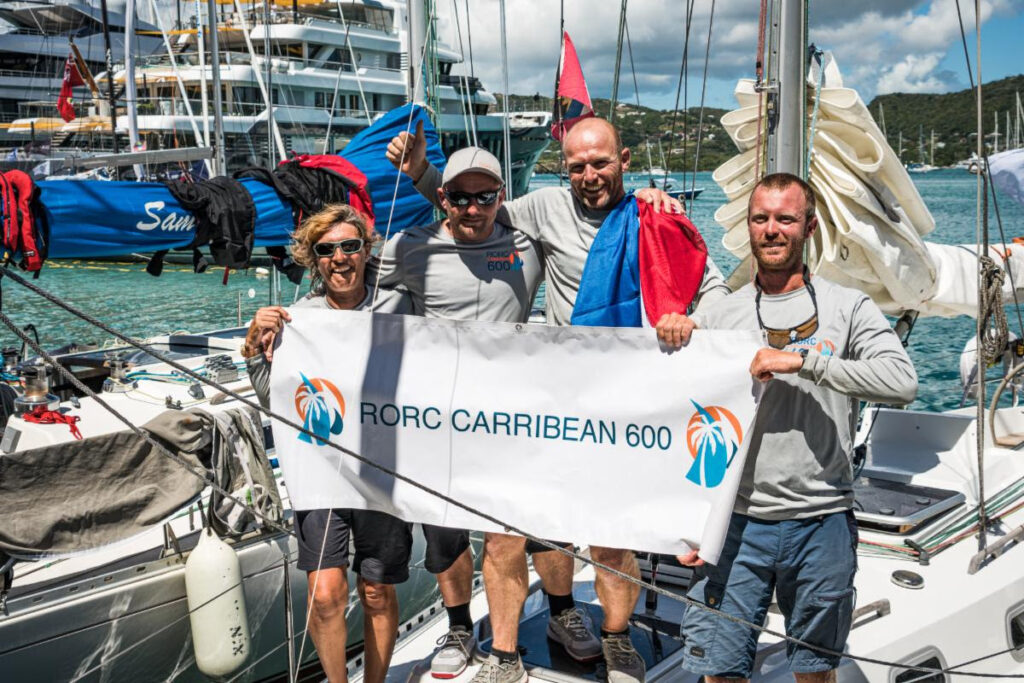 Yoyo Gerssen’s Cabbyl Vane, Ohlson 35 was the last to finish but received a huge welcome on the dock at Antigua Yacht Club © RORC

“Safety is the primary concern of the Royal Ocean Racing Club and the RORC Race Team monitor all of the boats throughout the race,” commented RORC Racing Manager, Chris Stone. “The RORC recognise the time and effort put in by all of the teams in the RORC Caribbean 600 and look forward to welcoming them all to race with the Club again in the future. Also, a big thank you to the huge number of volunteers who help with every aspect of the race finish here in Antigua.”

Representing Antigua & Barbuda at the Prize Giving were: His Excellency The Governor General Sir Rodney Williams, The Hon Charles Fernandez Minister for Tourism and Mr. Walter Christopher, Permanent Secretary to the Ministry and Tourism and Ms Shirlene Nibbs, Consultant to the Ministry of Tourism.

Check out the Live blog pages and race updates on: http://caribbean600.rorc.org/

Re-live the fleet tracker: http://caribbean600.rorc.org/Race-Information/Tracking/
Or download the YB Races App on iPhone or Android