The Sint Maarten Yacht Club, saw nineteen youth sailors from six different countries compete in the 16th Annual Sol St. Maarten Optimist Championship this weekend. With sailors from the Antigua Yacht Club, St. Kitts and Nevis Sailing Association, Club de Voile de Friar’s Bay (St. Martin), Youth Sailing Curacao and the Sint Maarten Yacht Club, the competition was fierce and the racing of high quality. Six competitors raced in the orange fleet and thirteen competitors raced in the blue fleet which is for the advanced sailors. The absolute winner of the blue fleet, and overall winner of the event, was Patrick Greensmith from Antigua, with 9 bullets out of 13 races, he won with a significant lead. 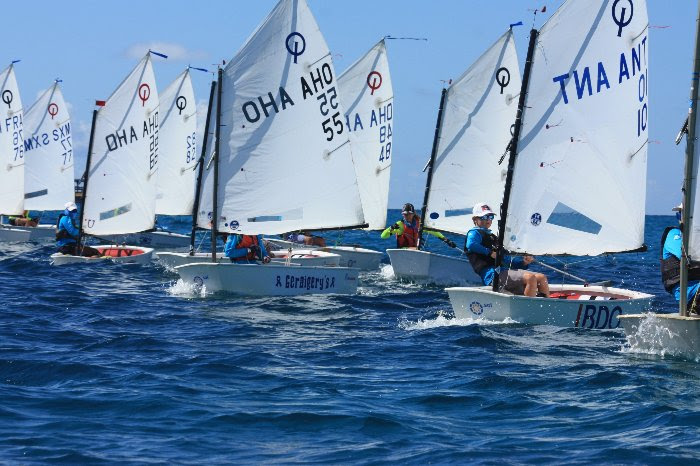 Start of the blue fleet consisting of 13 sailors

According to Sam Peeks, the race coach of St. Maarten: “We were so happy to see all the international teams joining again. Last year’s Championships was smaller in size due to the COVID travel restrictions, so it’s great to see that we can race internationally again. We would like to thank the teams for making the effort of coming over. You could tell the kids loved being able to compete on a regional level again and you saw friendships being formed during the course of the weekend, all good things that derive from international youth sailing events.”

Antigua attended the event with 6 sailors, dominating the podium of the blue fleet and also took the first and second place in the orange fleet.

The team from Youth Sailing Curacao flew in on Wednesday and did some practice sailing on Thursday and Friday in preparation of the event. Their two sailors sailed well in the blue fleet placing 11th and 6th.

The sailors from the Club de Voile de Friar’s Bay are regular guests now attending most races of the Sint Maarten Yacht Club Dinghy Series. They brought 6 youth sailors, most who sailed in the blue Fleet. The St. Kitts and Nevis Sailing Association sent 2 of their best sailors over, together with their coach. Both of them participated in the orange fleet taking 6th and 3rd place. The St. Barths Yacht Club had only 1 sailor participating this year who joined the blue fleet finishing in 7th place.

The Sint Maarten Yacht Club participated with 2 sailors this year.

Tyden Jones from Antigua, winner of the orange fleet

In the blue fleet, Antiguan sailor Patrick Greensmith convincingly became the overall winner of the event with 9 bullets out of 13 races and went home with the overall trophy and a Gill racing watch sponsored by Budget Marine. Emily Gaillard also from Antigua came in 2nd place with Antiguan sailor Alistar Knoblauch in 3rd place behind her with only 1 point difference. Antigua Yacht Club really took the honors in the blue fleet this year.

In the orange fleet, Tyden Jones from Antigua took 1st place with a stunning 11 wins out of 12 races! His teammate Henry Greensmith sailed consistently in 2nd place and even took 1 first place. Skyla Conna from the St. Kitts and Nevis Sailing Association finished in 3rd place. 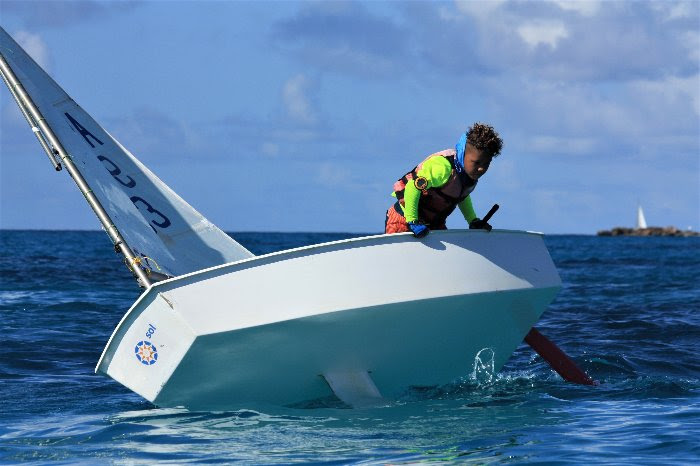 Stanley Haes Puverger from Saint Martin won the Sportsmanship Award for showing persistence and willpower to complete all races.

Two additional trophies for Sportsmanship and Best Newcomer were also awarded. Nathan Sheppard from Sint Maarten only started sailing in the Youth Program recently and sailed his first inter-island regatta, coming in 4th place in the orange Fleet, which got him to take home the ‘Best Newcomer’ trophy. Stanley Haes Puverger from Saint Martin, only 7 years old, showed persistence and fought to finish the races, for that he was awarded the Sportsmanship award.

Marisca Peterson, representing Sol: “It was great seeing all these happy and motivated sailors coming back from the water after a day’s racing. We are glad that we are able to contribute to this beautiful event and giving the sailors the opportunity to race.” 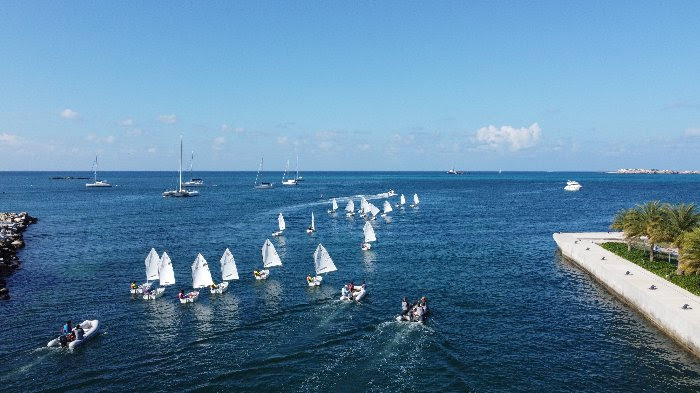 19 sailors from 6 countries participated in the 16th Sol St. Maarten Optimist Championships seen here as they are making their way to the course in Simpson Bay.

This year’s Race Officer was one who is very familiar with this event. Jolyon Ferron competed in the very first edition of the Sol Sint Maarten Optimist Championship, 16 years ago, and now participated in another way, that of Race Officer! “It brought back great memories! I was impressed by the level of sailing of the sailors and it shows that Optimist Racing is still a big deal around the Caribbean, quotes Ferron”.

“So many young competitors are excited for this event every year. We couldn’t have done it without all the help from the volunteers in Race Committee, onshore and offshore, and the sponsors that contribute yearly to this event. From donating prizes, to breakfast, snacks and dinner, our sponsors made it all possible” says Saskia Revelman, event manager of the SMYC. “This year we want to thank our title sponsor Sol and Mobil Lubricants. As well as our other regional sponsors: Budget Marine, Remax, Pineapple Pete, The Scuba Shop, Domino’s, Island Water World, Grant Thornton, Zeebest, Toppers, Bob Hilbert, St. Maarten Nectar, Med works, Divico and Solahot.

The trophies for this year’s edition are handmade especially for this event by Carla Templeton from The Silver Door. The Sint Maarten Yacht Club is trying to reduce its carbon footprint and part of their green efforts are to buy or create environmentally friendly trophies on island.

For all results, photos and more information about sailing events at the SMYC click here.