A unique, decades-long study of Sargassum species sheds new light on recent inundations in the Caribbean

If you’ve sailed the Caribbean in recent years, you may have noticed massive amounts of brown seaweed washing up on beaches and clogging harbors. This influx of Sargassum has caused alarm, as ecological and economic costs outweigh the potential beach nourishment and stabilization benefits associated with modest amounts of the seaweed.

For example, beached Sargassum can deter vulnerable and critically endangered marine turtles from nesting, skew gender ratios of their populations, and hinder their hatchlings’ survival. Ample mats of floating Sargassum have also proven a menace to sailors, as evidenced particularly in the 2014-15 Volvo Ocean Race. Concerned about impacts on fishing and tourism, the twin-island country of Trinidad and Tobago has even declared the situation a natural disaster.

Sargassum is a type of seaweed found globally along temperate and tropical coasts. Unique to the wider North Atlantic are Sargassum species that drift at the ocean surface in small clumps or extensive mats, creating an environmentally significant marine ecosystem in the otherwise relatively barren open ocean.

The drifting mats play many roles, including food source, nursery for juveniles, spawning ground, and protective habitat. They support diverse communities of invertebrates, fish, turtles, seabirds and other marine creatures at various points in their lives.

Where was all this Sargassum coming from? A compelling theory was that the Sargassum simply drifted out of the Sargasso Sea, a vast region bounded by the currents of the North Atlantic gyre and well known, as its name suggests, for harboring the seaweed. However, satellite observations and sea surface current modeling suggested an alternate origin in the equatorial Atlantic, a region never before considered to be a source of Sargassum.

By summer 2012 the inundation event had run its course and the normal pattern returned. Sargassum all but disappeared from the Caribbean. However, in April 2014, another inundation was underway, rekindling the debate about the seaweed’s source location.

That’s where SEA researchers stepped in. For more than 40 years, the organization has been studying Sargassum from the platform of its tall ship research vessels. SEA’s data sets are extraordinary in that they represent the only long-term quantitative record of Sargassum abundance before and during the recent Caribbean inundation events.

SEA faculty, crew and SEA Semester ® undergraduate students collected data to support their new findings on board the SSV Corwith Cramer from November 2014 to May 2015. Cruises began in the Canary Islands, traversed the Sargasso Sea and Western Tropical Atlantic to the Lesser Antilles, and then sailed the Eastern Caribbean before heading north to New England.
Their findings offer some surprising revelations about the latest seaweed inundation.

First, SEA researchers made a valuable discovery about the type of Sargassum flooding the Caribbean during the 2014-2015 event. Drift Sargassum consists of two species: S. fluitans and S. natans, which are distinguished by the presence or absence of thorns on the stem. Each species exhibits a variety of blade and bladder structures that can make species identification challenging for the untrained eye.

In their latest fieldwork, SEA scientists found that a previously rare form — S. natans VIII Parr — dominated the Western Tropical Atlantic, Eastern Caribbean and Antilles Current north of Puerto Rico, and was noticeably absent from the Sargasso Sea. This distribution is significant because it confirms that the Sargassum responsible for the unusual recent Caribbean inundation event did not come from the Sargasso Sea.

Second, SEA researchers were able to demonstrate that the huge amounts of Sargassum washing ashore truly were like nothing anyone has ever seen. Across the Western Tropical Atlantic, the average concentration of all Sargassum forms combined was 10 times greater in samples collected during autumn 2014 than those analyzed during the previous 2011-2012 inundation event—and a whopping 300 times greater than that of any other autumn over the last two decades of SEA research.

There are already signs that the most recent seaweed inundation event is coming to an end. Amid reports of clear Lesser Antilles beaches, late 2015 SEA Semester voyages in the Tropical Atlantic and Caribbean observed Sargassum structure different from the massive mats of extensively-branching, dinner plate-sized clumps of the year before. While S. natans VIII Parr abundance remained comparable to fall 2014, the seaweed appeared old – more orange in color and fragmented into small pieces. In fact, on a few occasions, SEA scientists observed seaweed groupings composed entirely of detached floats.

Still, questions remain: What triggers the start of these inundation events? When will the next event begin? What impact do these periodic events have on local fisheries, reefs, ecosystems and human activities? How do the benefits provided to marine environments and coastal communities differ between Sargassum species and forms?

Although modeling and satellite images can lend some insight, SEA scientists believe there’s no substitute for direct field observations at sea. On future voyages aboard the SSV Corwith Cramer in the Atlantic and Caribbean, you can bet that SEA researchers plan to continue gathering data about this important ecological and economic issue. 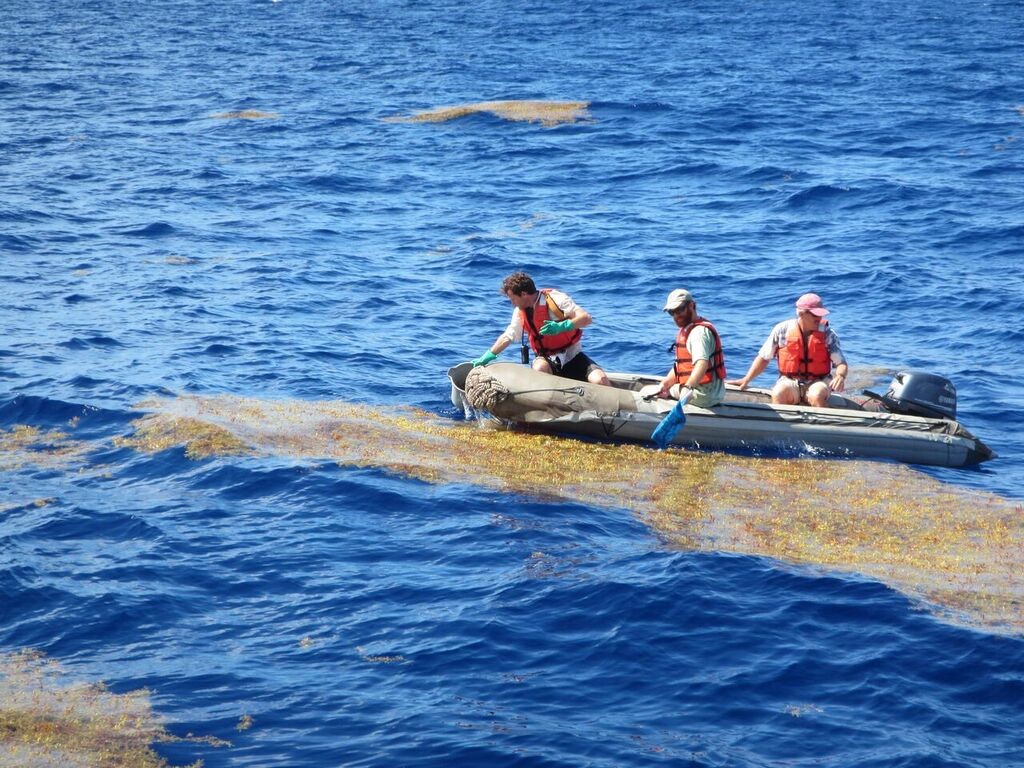