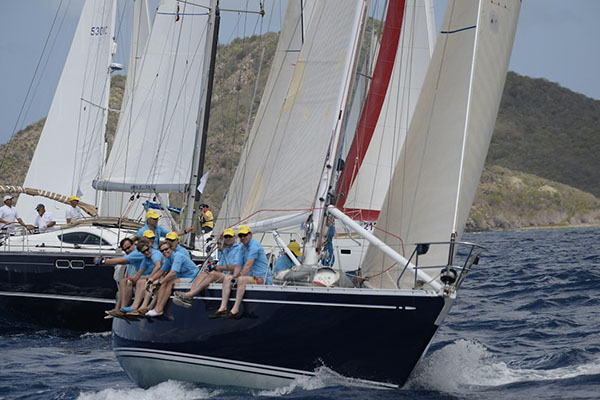 There are more than a million reasons to come to Antigua Sailing Week and today’s beautiful sailing conditions is one of them. Trade winds blowing warm air and splashes of sunshine on the deep blue Caribbean Sea are just about as heavenly as you can get. The international fleet of over 100 yachts enjoyed a relatively gentle day, with not a drop of rain in tropical conditions. Fine weather prevailed for the first day of Antigua Sailing Week, but the competition on the water was as close as ever.

Start Boat A ran courses from Windward Beach towards Shirley Heights and beyond to Willoughby Bay. The breeze was pumping up and calming down all day and teams that could change gear with the varying wind speed made the best of the conditions.

In CSA 4, Ian Hope Ross’ Melges 32, Kick ‘em Jenny 2 took the gun and the win on corrected time by just over a minute.  Ian’s team from St Maarten is returning to Antigua Sailing Week after racing here last year:  “We have a good set-up on the dock, we have sailed down with a catamaran and it’s our mother ship for the week,” explained Ian enjoying a cold Wadadli in the cockpit in Falmouth Marina. “We didn’t have a good start today and got into bad air. But by the second mark we had stitched it all back together and got into clear air. We had Bernie [Evan-Wong] on High Tension breathing down our neck all day and the two Cork 1720s are very well sailed. This is a very competitive class, but today the short chop suited us more than the other boats. This is only day one and we are not celebrating too much, there is plenty of racing to come.”

In Class Zero, British Farr 100, ICAP Leopard with owner Mike Slade at the helm, got away to a blistering start and quickly pulled away from the chasing pack including Andy Budgen’s Volvo 70, Monster Project.  Leopard hit the turbo button off the breeze to take line honours by half an hour and the pro-crew was joined today by Mike’s wife, Heather and four friends who enjoyed a high speed sail on one of the world’s fastest yachts: “I love coming here, what is there not to like?” quizzed Mike Slade dockside. “We have been coming to Antigua since 1990 and it is one of my favourite places to sail. Leopard has been very busy since the start of the year, giving many guests the perfect way to enjoy the Caribbean and Antigua Sailing Week is a marvellous way to round off the season.” 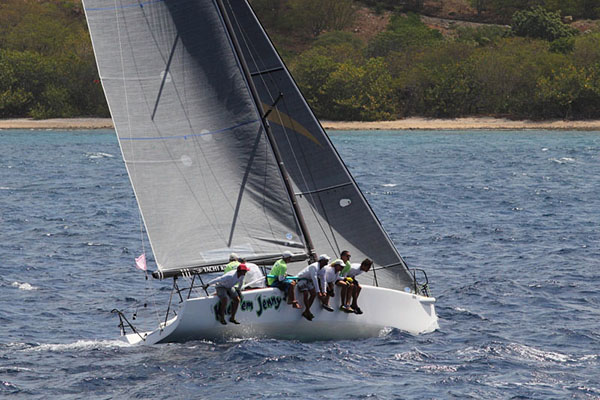 Piet Vroon’s Dutch Ker 46, Tonnerre de Breskens 3, has enjoyed plenty of success in the Caribbean this season and corrected out to win CSA 0 in Race 1 by three minutes from Rob Date’s Australian RP52, Scarlet Runner.

Start Boat B ran courses from Rendezvous Bay past Curtain Bluff and Old Road. The breeze was from the southeast and a shifting breeze kept drivers and trimmers on their toes.

In CSA 6, Tom Wilson racing British Swan 44, Selene corrected out to win Race 1. Selene’s owner Adrian Lower was on board and over the moon about the win: “Absolutely delighted,” commented Adrian. “Tom is an old mate and when he said he was looking for a boat to charter for Antigua Sailing Week, I said yes straight away. Also on board we have Stephon Dundas, who is from St. John’s, Antigua and is sailing on Selene for the second year in a row. Stephon oversees the front of the boat and I look after the back. We had a good start but we were almost over early, so the heart rate was up a bit there. Selene had a great battle with Tatonka all the way around the track. The Tatonka team sailed a great race and they obviously know exactly what they are doing. We thought we might have a podium place today but to win was above our expectations. What a brilliant start to the week!”

In Bareboat 1, just four minutes separated the top four boats in a three hour race. Garvey Colman’s Irish team on Bageal is returning after coming second in class last year. Bageal corrected out to win the first race of the regatta by less than a minute from the Kiev Racing Club. Nicholas Jordan’s Just De Ting completed the podium, placing third just ahead of Marcelo Baltzer Foucher’s Pinel.

Bageal’s skipper, Garvey Colman spoke after the race. “We came here last year and didn’t win a single race, so we are delighted to take a win on the first day, but we had to dig deep. We were fifth after the first beat and the boys got properly stuck in to challenge the team from Kiev in the lead. On the last beat, Kiev was covering us from the front and we took them on in a tacking duel. We were pulling out all the stops and we tired them out to take the win. We enjoy a few beers after racing, but if the first day is anything to go by, we are going to need to be very sharp tomorrow.”

After racing the American University of Antigua College of Medicine Daily Prize Giving drew a big crowd.  Chief Marketing Officer, Dr. Cory Greenburg, was on stage to hand out the AUA College of Medicine prize bags to the winner and the sailors were delighted. The barbecue grills were smoking and the icemakers were on. Tonight’s main entertainment is Rum and Rhythms:  Reggae with Idus and International sounds from Strays.  The America’s Cup Trophy will be on show in the Antigua Yacht Club Marina lounge from 6 to 8 pm. The sun is setting on the first day of Antigua Sailing Week.

Results, pictures, video and more can be found at: www.sailingweek.com