ST. BARTHS (March 15 2018) – In glorious conditions, the 31st edition of the St. Barths Bucket Regatta started today with the elegant and historically significant J Class yachts Svea, Velsheda and Topaz completing two windward/leeward races in a planned four-day series for their class. The Js comprise one of six classes competing here in this beloved international event; the other five are showcasing 23 Superyachts the likes of which few can imagine without photographs or being personally in their presence, such is the spectacle of their pure size, stunning design and miraculous engineering. Those yachts are scheduled to race a coastal course tomorrow (as are the Js) to begin their own separate three-day series.

Today, however, it was all about Svea stealing the show, albeit not with ease. The 47 metre sloop, built to original lines drawn in 1937 for a proposed America’s Cup contender that was never built, crossed the finish line first in both races and also won both races on corrected time, but as a testament to how challenging that was, Topaz (also a replica built to original drawings) and Velsheda (an original J) each also led at some point in the second race, and the three contenders finished that race within 10 seconds (9 corrected) of each other. 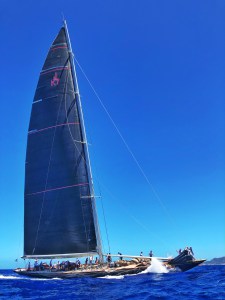 “The trick today was keeping things simple and staying out of trouble,” said Svea’s Tactician Charlie Ogletree, USA’s 2004 Olympic Silver Medalist in Tornado class. “Since we haven’t had any practice here, we decided to sail our own race, concentrate on boat speed and not get caught up in other peoples’ games.”

The oscillating 12-15 knots of wind saw Topaz and Velsheda trade turns taking second-place finishes, so with that they are tied on point score at 5 each, with Svea showing 2 points on her scorecard.

Much goes in to the management of Superyacht racing, and as of this regatta, the J Class rating system has changed a bit. When previously the ratings were applied across three wind bands – light, medium and heavy air – now each yacht is rated with a TCF (time correction factor) for every single knot from seven to 20 knots.

“Previously there were significant ‘cliffs’ on the curve for some yachts,” explained J Class Measurer Andrew Yates in a J Class report from yesterday, “occurring for them where the change from one wind band to another occurred. Now this should be smoothed out for everyone.”

Svea received her daily prize this afternoon at the Capitainerie, which serves as regatta headquarters and where, later this evening, sailors will enjoy a Fleet Welcoming Party. Addressing the attendees of the Captains’ Briefing for tomorrow’s races, also held at the Capitainerie, was Ernest Brin, Director of the Port of Gustavia, who has seen many Buckets and has been working especially hard since the hurricanes to ready things for the sailors here. To applause of appreciation he said, “We’ve had our fun in September; You have YOUR fun this week!”

The Bucket fleet will start near the Outer Harbor tomorrow and sail counter-clockwise around the island, wind and weather permitting. Saturday is traditionally reserved for the “Not so Wiggley” Course, around and through the islands to the northwest and west of St. Barths, while Sunday usually sees the fleet sail a clockwise course around the island.