The Cutting Edge of the RORC Caribbean 600

Multihulls have been racing in the RORC Caribbean 600 since the very first race in 2009 when Claude Thelier’s (FRA) Region Guadeloupe, skippered by John Burnie (GBR), set a record that was not bettered until 2015. In recent years the multihull fleet has been on the rise and the current race record is most definitely under threat. For the 11th edition, the fleet has a huge variety of designs racing under the MOCRA rating system to decide the class winner. The non-stop race around 11 Caribbean Islands has attracted multihull crew from Antigua, France, Great Britain, Ireland, Italy, Portugal, Spain, Sweden and the United States.

Maserati Multi70, skippered by Giovanni Soldini (ITA) will be taking part in their second race. Maserati is turbo-charged with T-Foils and is the hot favourite for Multihull Line Honours, along with Argo, skippered by Jason Carroll (USA), winner of the 2018 GC32 Owner-Driver Class. If the conditions are right, both teams are capable of eclipsing the Multihull Race Record set by Lloyd Thornburg’s Phaedo3 in 2016 (31 hours, 59 minutes, 04 seconds).

This will be the first RORC Caribbean 600 for Jason Carroll’s MOD70 Argo, but all of the crew have done the race before, including Brian Thompson (GBR), who was co-skipper for the record run by Phaedo3. Argo Boat Captain, Chad Corning (USA) is relishing the prospect of hurtling around the course at speeds in excess of 30 knots.

“We really enjoyed the 2018 Caribbean 600 which we raced in our Gunboat 62 Elvis, commented Argo’s Chad Corning. “The boat performed beautifully but it’s DNA was more cruising than racing and we had to lift off the gas pedal at times. We’re excited to come back this year with the MOD, a boat that is built tough and is able to be sailed hard. Sailing against top competition for the first time is a big attraction for us as well. There are a lot of tricky sections to the course. Getting through the unpredictable section by Saba is one, punching through the lee of Guadeloupe is another. Besides the geographical challenges, we’ll keep a close eye on rest and nutrition and try to maintain an even cadence throughout the race. I suspect there will be nothing in it coming into the finish. In the end it will come down to executing manoeuvres cleanly, avoiding the potholes at Guadeloupe, and keeping the guys fresh and focused.”

Greg Slyngstad (USA) will be racing his Bieker 53 Fujin with a top crew, including America’s Cup winner Peter Isler (USA) as navigator, and Olympic Gold Medallist Jonathan McKee (USA). Fujin made the headlines in last year’s race for the wrong reasons, capsizing on the first night at sea.

“This race is unfinished business for Fujin,” commented McKee. “We have not changed the set up that much, except small adjustments to our safety equipment and more protection to the helm station to cope with hour after hour of fast moving salt water. Our first goal will be to finish and give the boat the respect it deserves. It will be difficult to beat the MOD70s on rating as they tend to push it harder due to the intensity of their racing. However, under the MOCRA rating every dog has its day. We will be sailing smart, especially with Peter Isler, who is a great addition to the crew.” 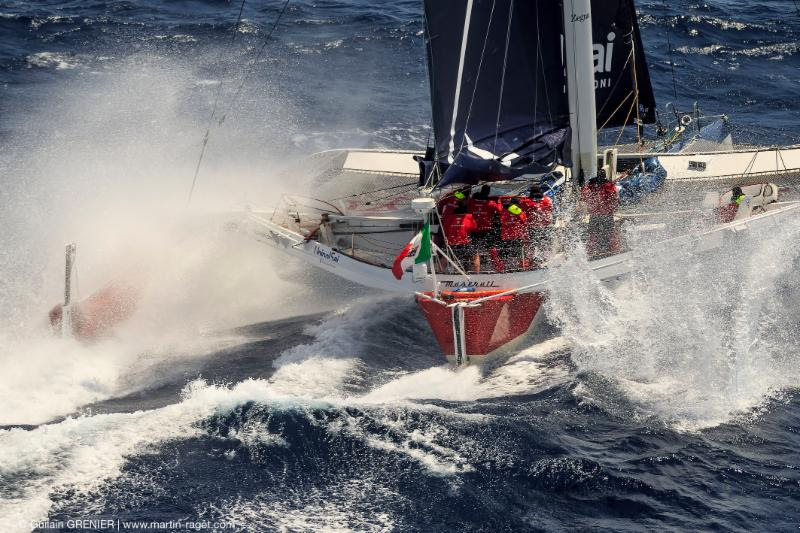 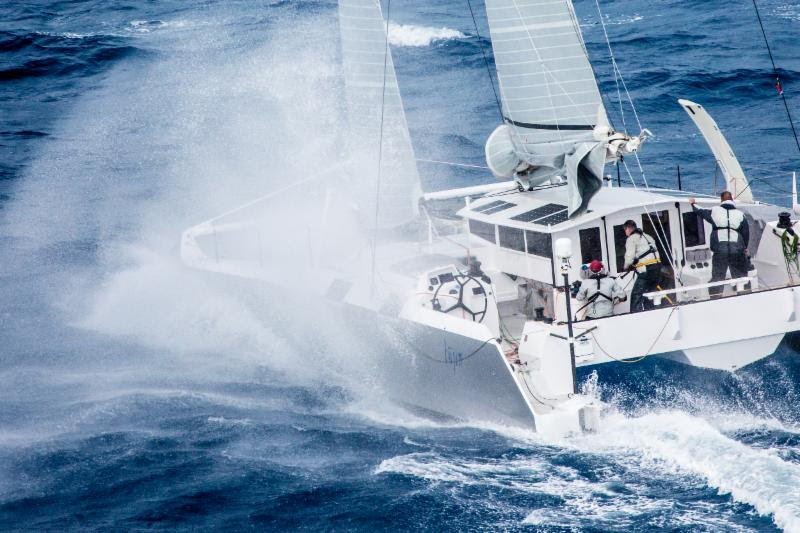 After capsizing in 2018, Greg Slyngstad (USA) is back to complete the race in Fujin, Bieker 53 © Arthur Daniel 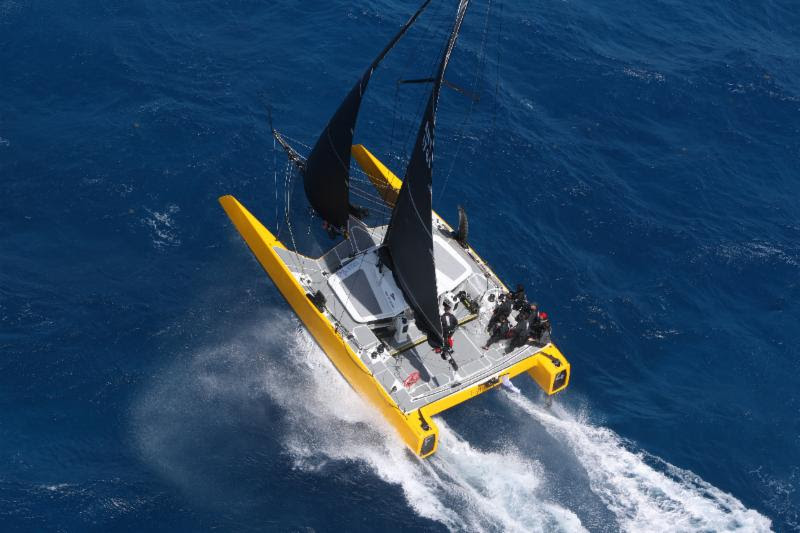 Antigua’s Shannon Falconne will be pushing the boundaries of long-distance racing in his DNA F4, Falcon © Tim Wright/Photoaction.com

“To finish and have fun are the two main goals for Falcon,” commented Shannon Falcone. “Also, to show what the boat is capable of. Perfect conditions for us would be flat water, but we can handle 18-20 knots and two metre swell. We have a great team and the boat has already shown its ability in distance racing.”

Rocco Falcone (ANT), 17 year-old brother of Shannon Falcone will be also be racing in the multihull class on board Arethusa, as Shannon explains: “When I started racing 20 years ago there was nothing like the opportunities available to Antiguans that exist today. Rocco is lucky to score such a great ride in a fantastic race and he should be the hardest worker on and off the water. Professional sailing is very much on the road map for Antiguans and races like the ‘600 can fast-track their development and ambitions.”

Phil Lotz (USA), Past Commodore of the New York Yacht Club will be racing his Gunboat 60 Arethusa with multihull specialist Jeff Mearing (GBR) as part of the crew. Arethusa will be in direct competition with John Gallagher (USA) racing Gunboat 62 Chim Chim, which will be skippered by Owen Johnson with a crew of talented multihull sailors including, Mat Bryant (USA) and Nils Erickson (USA).

“The race is unique in that you race 600 miles but return to the same spot and essentially experience the same weather patterns throughout,” commented Phil Lotz. “I think the ‘corners’ present some of the biggest challenges; picking the right sail and dealing with the many changes such as wind strength behind islands, and different wind angle changes from leg to leg. The race has proved very popular to North American teams because of the location. Many North American boats like to spend time in the Caribbean, so it’s not surprising a good distance race has become so popular.”

The Multi50 Rayon Vert is skippered by Alain Delhumeau (FRA) with his son Johan Delhumeau ((FRA) as co-skipper and a crew of friends from Guadeloupe. 60-year old Alain was recently awarded two medals of honor for persevering and completing the 2018 Route du Rhum. “Sailing has always been part of my life, and as a family of fishermen, part of our history too. I share this sailing passion with my son Johan through the different races we compete in, and he was my weather router during the last Route du Rhum Race. The RORC Caribbean 600 race is so special because it is a great pleasure to race in an amazing place and we will aim for a good result.”

One of the most unique boats racing this year will be Olmix, skippered by Pierre Antoine (FRA). The Multi50 is entirely made of wood. During the 2018 Route du Rhum, Antoine changed course to rescue the skipper of the capsized trimaran Arkema, 1,000 miles offshore. In spite of this, Olmix finished 11th out of 123 boats, winning the Rhum Multi Division by over three days. Pierre Antoine is a highly experienced offshore multihull racer, having competed in four editions of the Route du Rhum. 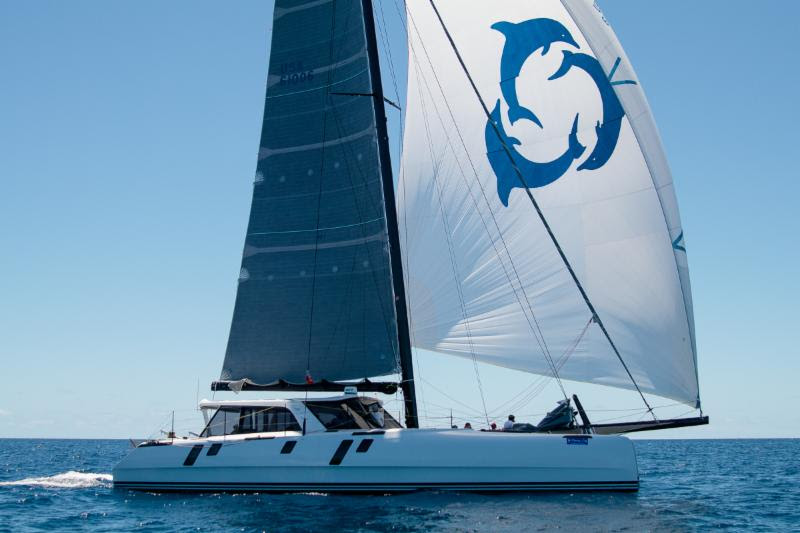 Phil Lotz (USA), recent Past Commodore of the New York Yacht Club will be racing his Gunboat 60 Arethusa with multihull specialist Jeff Mearing (GBR) as part of the crew © Gunboat 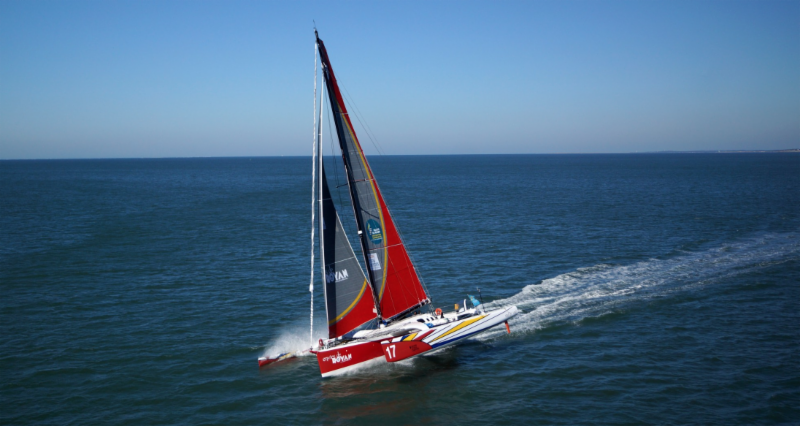 Multi50 Rayon Vert is skippered by Route du Rhum sailor Alain Delhumeau (FRA), with his son Johan Delhumeau ((FRA) as co-skipper and a crew of friends from Guadeloupe © Côte & Image/Royan

PLAY THE GAME – VIRTUAL RACE:
If you’re not on the startline in Antigua, join the virtual race. Be prepared for some sleepless nights – it’s addictive! Subscriptions open at 1600 UTC on Friday 8th February: http://click.virtualregatta.com/?li=4865